The book was unveiled at the premises of the Iyana Isolo based church on Saturday, August 2020.

The book was unveiled alongside the annually released Warnings To The Nation.

Describing the book as a first of its kind, Primate Ayodele said that no pastor or prophet has achieved a feat like this.

“A  Compendium Of Ten Thousand & More Fulfilled Prophecies” covers prophecies between 1994 to 2020.

Apostle (Pastor) Dapo Bamisaye wrote one of the introduction of the book, while an endorsement of the was done by His Imperial Majesty, Oonirisa Okunade Sijuwade Olubushe II.

The 608 pages of revelations of God is indeed a collector’s item. 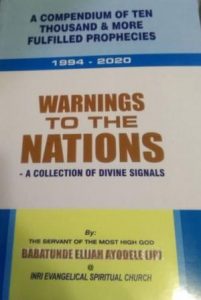 Why I Stepped Down, Acting Unilag Vice Chancellor, Professor Soyombo