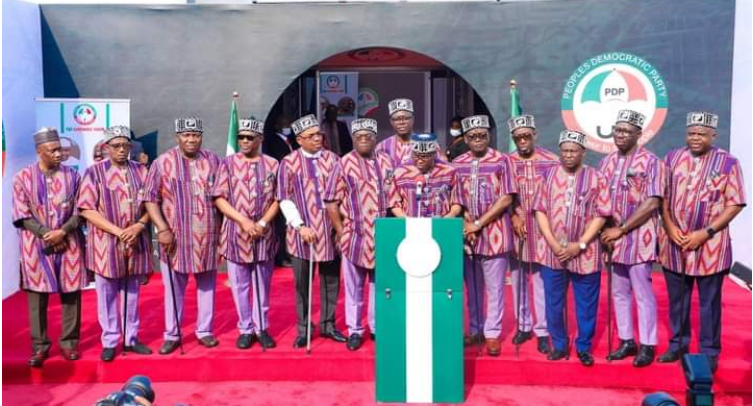 Governors of the People’s Democratic Party (PDP) have vowed to save Nigeria from near collapse.

This was stated in a communique released on Wednesday, March 23, after the governors met in Aba Abia State.

In a communique issued at the end of their meeting, the governors lamented that the ruling All Progressives Congress (APC) has continued to inflict excruciating hardship on Nigerians, even as they noted that the party was on its way to collapsing.

Lamenting the state of insecurity and rapid increase in prices of essential commodities, the governors noted that life was much better in 2015 under the PDP than today under the APC.

The meeting which was attended by every other PDP governor, apart from Darius Ishaku of Taraba State who was represented by the deputy governor, Haruna Manu, offered the governors an opportunity to access the performance of the President Muhammadu Buhari led APC government since its inception in 2015.

After assessing the performance of the ruling party, the governors concluded that Nigeria was failing under its watch and asked that they be given the opportunity to save it in 2023.

The communique read the in full:

The meeting reviewed the excruciating hardship and suffering being meted out to Nigerians by a failed APC led Federal Government; the near collapse of the APC as a viable political party, the readiness of the PDP to take over and offer qualitative leadership options to rescue the nation and issued the following Communique:

1. We lament the terrible pain and hardship facing Nigerians in virtually all aspects of life. The meeting noted that life was much better in 2015 under the PDP than today under the APC as exemplified in the following Comparative Indicators obtained mainly from the National Bureau of Statistics:

2. The Forum is surprised that in the face of these statistics of complete failure in all ramifications and areas, the APC still wants to be on the ballot in 2023.

This shows how uncaring and insensitive the APC is. IT HAS BECOME A MENACE TO NIGERIA.

3. The Forum urges Nigerians to reject the APC, a party run undemocratically by a Committee contrary to the Constitution (S.228) with Mr. President regularly issuing instructions and dictates. It is impossible for a party so disorganized to offer good governance to the people of Nigeria.

4. The meeting expressed concern and alarm over various reports and claims of incidents of stealing of crude oil ranging from 80% to 95% of production made by industry practitioners and called on the Federal Government to set up an appropriate mechanism to reverse this trend and bring perpetrators to account.

5. The PDP Governors once again decried the inability of the NNPC to make its statutory contributions to the Federation Account, inspite of Oil selling at above $110. It is patently unconstitutional for NNPC to determine at its whim and discretion when and what to pay to the Federation Account, as it is a mere trustee of the funds for the three tiers of Government: Federal, States and Local Governments. We once again, call for investigations and audit of the quantity of consumption of fuel ascribed to Nigerians and for deployment of technology at the filling stations to determine in a transparent manner the volume of consumption.

The Governors would resist any further attempt by NNPC to ascribe unsubstantiated subsidy claims to other tiers of government.

(c) Nigeria Federation has 49% shareholding in NLNG. According to the Minister of Finance during the 2020 budget performance brief at the National Assembly stated that the federation received dividend of N144billion (One Hundred and Forty Four Billion) from NLNG. These figure to the best of our knowledge was never paid into the Federation Account.

(d)) NNPC deducts N8.33Billion monthly for the rehabilitation of the Refineries in Nigeria. Till date no refinery is working.

(e) On priority projects of the Nation’s oil industry, NNPC deducted N788.78Billion for various investments between 2018-2021 without recourse to FAAC.

(f) NNPC in 2021 alone claimed to have paid over One Trillion Naira as petroleum subsidy. Indeed, the month of March 2022, N220Billion was deducted as oil subsidy with a promise that N328Billion will be deducted in April 2022. This is unacceptable.

(g) NNPC and FIRS as well as other remitting Agencies continue to apply an exchange rate of N389/$1 as against the Import and Export window of N416/$1. The extent of this leakage can be better felt, if this rate is compared to the current N570/$1.

(h) From available records about N7.6T is withheld between 2012 and 2021, by NNPC from the Federation Account. All these are said to be payments for oil subsidy.

(i) Conclusively, we believe that all these leakages in NNPC have been made possible because the President is also the Minister of Petroleum. The urgent separation of these two portfolios have become necessary

7. The Forum noted the approval by the PDP NEC of the Time Table and Timelines for Congresses and Convention of the Party and urged all party members and party leadership to remain focused and united to win power in 2023, to tackle the myriads of problems facing the country.

8. The PDP Governors congratulated the host, His Excellency, Governor Okezie Ikpeazu, the PDP Governors’ Forum Vice Chairman, for his generosity and hospitality in the hosting of the meeting.

Related Topics:APCDarius IshakuPDPPDP Governors Vow To Save Nigeria From APC’s DestructionPresident Muhammadu Buhari
Up Next