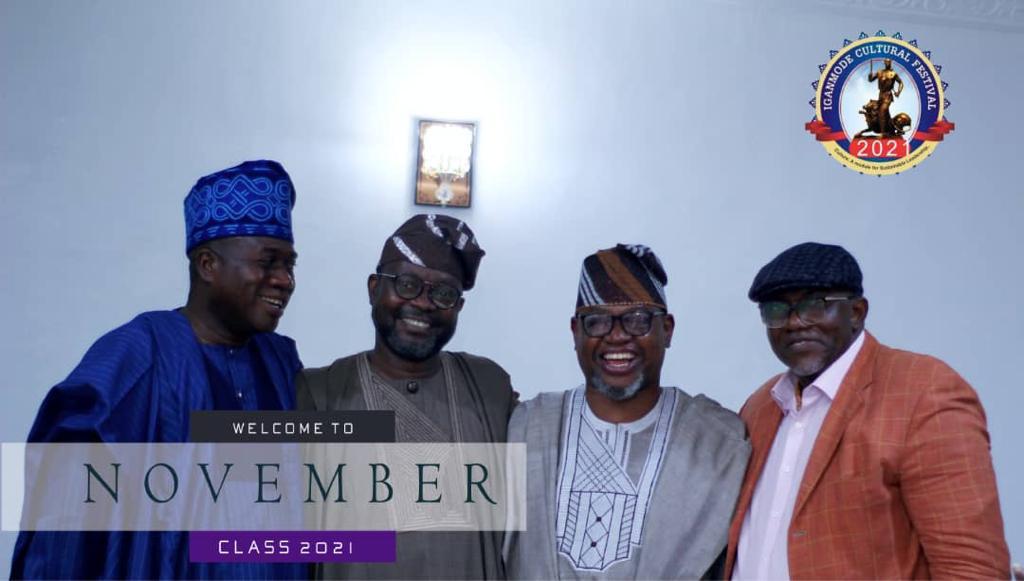 The annual one week-long Iganmode Annual Cultural Festival, “Odun Omo Iganmode Afeleja,” has been scheduled to hold from December 13 to December 19, 2021 with the theme; “Culture: A Module For Sustainable Leadership In Nigeria.”
According to the Chairman of the Central Planning Committee of the event, Aare Ayodele Bankole, the festival opens on Monday  December 13 with the Osugbo Prayer session, which he said will come up at the Olota of Ota Palace.
This was just as the Olota of Ota, Oba (Professor) Adeyemi Obalanlege (Lanlege Ekun II, Arole Iganmode) called on all residents, companies, and individuals, “who have chosen Otta as their home or are indigenes to support us to have a successful outing.”

Buttressing the view of the monarch, Aare Bankole added at a press briefing, which was held at Oba Isiyemi Hall, Olota Palace on Wednesday that as part of the activities for the festival, there will be a free Medical Outreach program to cater for the aged and the less privileged members of the community.
“It will be a day-long affair with medical personnel on ground at the palace attending to people needing medical attention.
“Day One will be concluded with a charity visitation to Ijamido Motherless Babies Home.
“Day Two Tuesday, December 14 is our Youth Day. There will be a Youth Summit to give lipid and activate meanings to our central theme; “Culture as a Module for Sustainable Leadership in Nigeria.”
“The session intends to educate and inform participants on the significance and synergy between culture, customs and building sustainable leaders for effective leadership roles in the society.
“The day will be wrapped up with a Street Carnival for the Youth,” Aare Bankole revealed..

The Central Planning  Committee Chairman added that on Day Three, Wednesday December 15 is the Cultural Day, saying that It promised to be a day for all to remember from 3pm at the Olota’s Palace Open Ground.
Day Four, which is Thursday December 16, he said is planned for the installation of new chiefs at the Olota Palace at 10am, when traditional and honorary chieftaincy titles will be bestowed on deserving members of the community.
“On Day Five Friday December 17, there will be a Special Jumat Service at Ota Central Mosque from 1pm.
“Day Six, Saturday December 18 is for the Grand finale billed to take place at St Michaels / AnsarUdeen Primary school, Ota from 10am.
“Day Seven, Sunday December 19 is for Thanksgiving Service at the Living Faith Tabernacle (Winners Chapel),” he said.

Olota of Otta said further at the briefing that the fact that the leaders of the town were at the event was a confirmation of their continued commitment to play their fatherly role to painstakingly preserve the style and substance of “this great kingdom.”
“Undoubtedly, every “Odun Omo Iganmode Afeleja” comes with great improvements on the previous ones.
“The theme of this year is “Culture: A Module for Sustainable Leadership In Nigeria,” could not have been more apt, especially as this historical and spiritual event has helped immensely in projecting the rich cultural values and norms of the Otta people and by extension, all Awori People as a whole.
“It is a festival that helps to remind our people of their origin and identity, as an essential component for stimulating communal understanding, love, unity and for augmenting steady progress, peace and development of the larger Community.
“This year’s theme is more apposite. As sons and daughters of Otta, l must say that from birth, we have imbibed the right cultural values and morals needed in all spheres of life. Again, as a people, the cultural heritage we inherited from our fore-fathers.
“This has also helped in our determination to ensure the massive socio-cultural and infrastructural development that we have now witnessed across our sub-ethnic nationality since I assumed office as the Olota,” he said.
The monarch stressed that Otta Kingdom occupied a very important place in the ecosystem of the state and the country, “especially as the Industrial nerve-centre of the economy.”
He emphasised that they were the Geese that lay the Golden Egg is not unconnected with their history.
Otta, nay Aworiland, he explained, is home to “very interesting historic sites as well as unique traditions and customs of which we are reputed. Culture is believed to be a distinctive way of life of a group of people.
“Moreover, in order to promote our cultural heritage, we believe in enhancing industry and tourism.
“To attract tourists in appreciable numbers however, we need to develop our infrastructure and generally upgrade our environment.
“That is why I will call on the State Government to come to our aid to fix the deplorable roads that are in Otta and give us a fair share of our contribution to the State economy,” he stated.
The Oba promised that they would continue “to sensitise our people not only to be of good conduct, but to be loyal, patriotic and support the Government of the day by paying their taxes regularly.
“Our people need to focus attention on the necessary conducive atmosphere for businesses to continue to thrive by maintaining the peace and shunning social vices that will heat up the polity. Only then can we legitimately demand that the Government should compensate us with various infrastructural development projects.”
While revealing that they will be honouring some Awori Citizens who have distinguished themselves in community development and personal lives, which he said have direct impact on the town’s historical antecedents, he said that they will be acknowledging some friends of Otta, who have made life more abundant for the citizens who come to work, live and play in the town.
“We appreciate the likes of Chief Michael Adenuga who have offered to fix the 64 kilometre Otta-Idiroko Road, and it is on this note that I will urge other industrialists and investors to emulate such a move.
“We thank the Governor, Prince Dapo Abiodun for his resilience in fixing some of the terribly bad roads here, including the Lagos-Otta-Abeokuta express road, intra-city roads like Joju and the Attan-Lusada road which leads to the largest Industrial hub in the country at Agbara.
“While we request partnership with the state Government on this Cultural Festival and its mainstreaming in the Tourism Calendar of the State like it is done with Ojude Oba, Lisabi Day, Oronna Day or even Odun Omo Olowu that continue to enjoy Government patronage and presence every year, we will encourage Government not to rest on it oars to fulfil all promises to our people.
“For us, we will continue to support all genuine efforts by individuals and groups that are directed at improving the cultural heritage and the lives of our people in general,” he said.
Post Views: 177

Its Official: Femi Osibona Is Dead