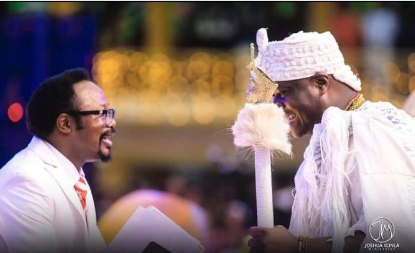 The Ooni Of Ife, Oba Adeyeye Ogunwusi Ojaja II along with his delectable wife, Olori Naomi Ogunwusi have surprised the General Overseer of Champions Royal Assembly, Prophet Joshua Iginla with a gift of 10 gigantic cows to celebrate his mother’s burial which is set to begin today.

Prophet Iginla had announced that the burial of his mother, Dcns Mrs. Lasisi Iginla will kick off on Friday, 29th of October and run through Sunday, 31st of October, 2021.

Expression of love from well-wishers has thus seen the man of God receiving gifts from dignitaries around the world whose lives his ministration has touched. However, the special gift of 10 cows from the leading paramount monarch of Yorubaland came as an attestation to the fact that Iginla’s ministry has become a global brand courted by traditional rulers.

Iginla on his own part in his words expressed his gratitude to the Ooni of Ife and his Olori for the huge honor bestowed upon him at such a moment like this. He said he is bewildered by such an expression of love from the paramount ruler of Yoruba land for his unconditional love and belief in him and his ministry. He described the Ooni as an angel in human form. Furthermore, He described the amiable Paramount ruler as an intelligent king who is extremely full of wisdom, a man of the people, a bridge maker, line crosser, barrier breaker, and a lover of God and the youths.

He explained that he never expected to receive such a huge gift from the Ooni Of Ife even though he has always been a source of blessing to his ministry. He raised a prayer for him that the God of his ministry will preserve him and his kingdom.

This is not the first time Ooni of Ife will be identifying himself with Prophet Joshua Iginla. During his birthday celebration earlier this year, he stormed Champions Royal Assembly with his wife, Olori Naomi Ogunwusi to felicitate with the world-renowned man of God.

His presence at his birthday celebration also proved the intimacy between the traditional ruler and the man of God. No wonder he described Prophet Iginla as a man of God whom he respects so much.

Related Topics:Ooni Of Ife Surprises Prophet Joshua Iginla With 10 Cows For Mother’s Burial
Up Next