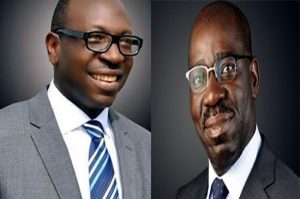 It is hardly party time for Edo State Governor-elect, Godwin Obaseki. Since he emerged winner of the September 28 election, Obaseki and his entourage have been paying homage to those who matter in the state.
The Governor-elect and his political Godfather, Adams Oshiomole among others recently visited the Crown Prince of Benin Kingdom, Amb. Eheneden Erediauwa.
However, amidst the celebration is a talk of its being premature after all.
Recent information that has emerged from the Peoples Democratic Party (PDP), National Caucus has revealed that the party might be set to contest the result of the election in court.
The PDP National Caucus described the election as a charade setting the ground for their next move.
Definitely, Obaseki needs to sit tight, as a long nightmare might just be about to start for him.