The Federal Government of Nigeria’s National and Social Investment programme with particular reference to N-power for the purpose of this piece which started four years ago, has been welcomed, accepted and adjudged by many as a life-changing initiative of the current administration, led by President Mohammadu Buhari, aimed at lifting many especially unemployed youths out of poverty as well as empowering many in various areas of entrepreneurship.

The above position is predicated on the assertion that many beneficiaries according to the Minister of Humanitarian Affairs, Disaster Management and Social Development Sadiya Farouq have become entrepreneurs and are doing well in their chosen businesses. 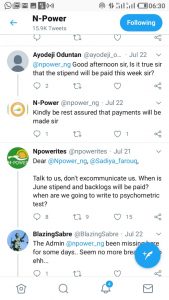 According to Sadiya Farouq, “over 109,823 beneficiaries of Batch A and B of N- Power programme across the country have established businesses in their communities statistics like this give me joy and once again, I want to say congratulations and like I said in my good will message I look forward to hearing amazing testimonials and meeting beneficiaries of this programme who will be doing great things in the future.’’

As laudable as this programme is, it has been faced with unceasing complaints and issues of delayed stipend payment to the beneficiaries since it was put under the control of the Ministry of Humanitarian Affairs, Disaster Management and Social Development headed by Sadiya Farouq. And to extreme, many N-Power beneficiaries have also continued to questions the delay in the clearance of their backlog of stipends arrears, running to two to three months or more now.

One explanation given by the ministry could be seen from this excerpt written by Joseph Erunke and published by the Vanguard Newspaper on July 23, 2020, “The federal government, Thursday, said it did not pay 14,020 enrollees in the just ended batches of N-Power programme because the affected beneficiaries’ account details were found to be already existing in other ministries, departments, and agencies. The government which noted that the actions of the enrollees were against the established rule of the N-Power programme, regretted that the development affected some genuine and eligible beneficiaries.”

From the abovementioned excerpt, the question agitating most minds of the beneficiaries is; why will dogs eat feces, and goats will then inherit tooth decay? Regretting that the development affected some genuine and eligible beneficiaries isn’t the best way to assuage the feelings, patience, circumstance of the beneficiaries,  considering the hard times of nowadays and coupled by the COVID-19 pandemic which has had its toll on most world economies.

Again, early March this year, Minister of Humanitarian Affairs, Disaster Management and Social Development, Sadiya Farouq, explained that the delay in paying N-Power beneficiaries was due to some verification process in the ministry.

Farouq disclosed that the Ministry was out to understand and have a full list of beneficiaries that were paid before she took over as Minister.

In a statement, she signed, Farouq said: “I know we had a complaint in October while we just got the NSIP into the ministry and we needed to understand the programme considering that it has been in existence before we came on board. We needed to understand before we start signing for a large amount of money and that was why we had the delay then.

The time to act is now, as the batch A and B beneficiaries continue to inundate N-Power social media handles with questions on when their 2020 June and July stipend will be paid.

Hon. Sadiya Farouq over to you

Related Topics:N-powerN-power: Delay stipend payment and beneficiaries’ deluge of questions
Up Next

Edgar Reacts to “NDDC Probe: Pondei; others collecting 30% before contractors are paid”