The last has definitely not been heard about who gave the order to demolish Yinka Ayefele’s Music House.

The music industry was shocked to wakeup to the news of the demolition of the property which housed his Fresh Radio Station and other business concerns on Sunday, August 19.

After several attempts of hiding behind the curtain, Governor Abiola Ajimobi, has finally confirmed that he gave the demolition order.

Speaking in an interview with BBC Yoruba, Ajimobi confirmed he gave the order insisting that the building had contravened the physical planning law.

In his first public reaction since the demolition on Yinka Ayefele’s music house in Ibadan, Governor Abiola Ajimobi of Oyo State has said the building plans goes against the law.

‘About the house they said we demolished, Ayefele didn’t obey the law and people came with sentiments that he’s on a wheelchair and employs people, so what? Even armed robbers employ people. The law must be upheld at all times’. 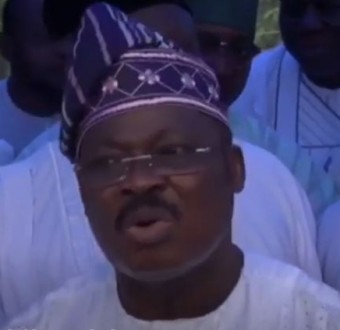 The Music House was demolished by the state government despite a matter regarding the said property being in court.

Meanwhile, there are informations that hours prior to the demolition of the property, Ayefele’s wife had visited the governor in his home where he promised to look into the issue and vowed to make sure the Music House was not demolished.

However, it was with shock that the woman learnt that her husband’s most prized asset had been demolished hours after she got the words of the governor promising he would look into the issue.

Why I Went To Jamaica, D’banj Explains