Cartel Music boss, Tekno, has revealed the most painful aspect of his recent sickness.

Speaking during an interview, the ‘Agege’ singer revealed that he felt more pain from the fact that people thought that he was lying about his sickness than the operation to correct his vocal cord brought. 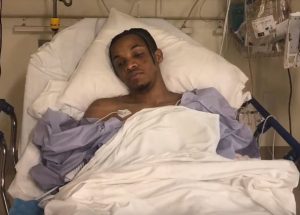 Tekno on his sick bed

According to him, during the period of his sickness, a lot of people considered him a useless artiste, who hardly took anything seriously, but only want to smoke and chill.

Stating that his experience was not one which anybody would want to celebrate, Tekno said: “I just wanted to keep it to myself because it was not something that you tell people about. It wasn’t something that I wanted to remember or tell. I lost money and I was upset. All I wanted was for it to be over because it was a painful experience. My dad was crying and my mum was really scared.”