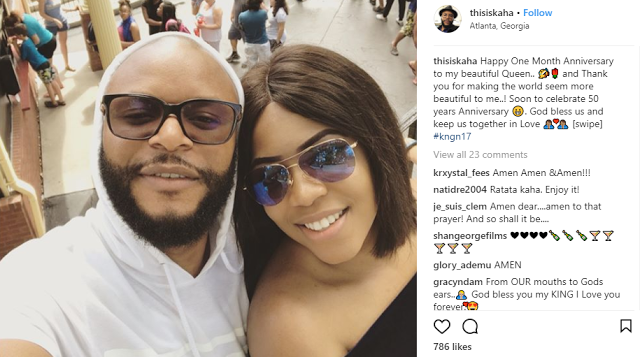 Remember Kaha real name Emmanuel Nzemeke?,  well no one will blame you if you don’t.
The Nigerian onetime singer who spent sometime hustling in the music industry recently surfaced on social media, instagram.
Kaha is however not singing this time, but talking about how he met his wife who he got married to 10 months after meeting her.
The singer turned businessman took to Instagram to share the first ever Direct message he had with his wife.
According to him, the road to their marriage wasn’t really a complicated one. The former singer revealed he and his wife got talking after she responded to his DM a month after he sent it. They also got married 10 months later.
While he was a singer, Kaha dropped songs including “Heart Robber’, a song which  recently saw him coming for popular singer Yemi Alade alleging copyright.
According to Kaha, the female singer didn’t take permission from him to do a remake of the song ‘Heart Robber’ which he had copyrighted since 2009.
Post Views: 1,405