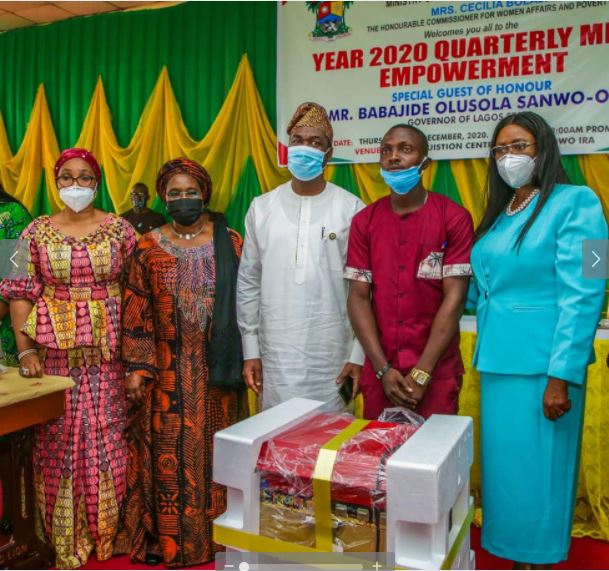 One Thousand and Fifty Lagosians were today presented with various items by the Lagos State Government under the auspices of the Empowerment Programme of the Women Affairs and Poverty Alleviation Ministry.

In his remarks, the Governor of Lagos State, Mr. Babajide Olusola Sanwo-Olu represented by his Deputy, Dr. Kadri Obafemi Hamzat urged beneficiaries to utilise the various items provided adding that the world is going through significant challenges at this time.  Thus making assistance to the vulnerable citizens critical.

He restated the commitment of the Administration to provide succour to citizens especially in the face of daunting challenges resulting from the COVID- 19 pandemic.

He acknowledged the contribution of women to society stating also that the Administration will continue to focus on women by providing methodologies for their advancement.

The Governor further stated that the empowerment programme is an ‘’effective and pragmatic approach ‘’ to empower women for economic independence and self-reliance.

He added ‘’women are powerful agents of change in view of the massive role they play as home builders and change-makers, hence, our relentless commitment to ensuring that the rights of our women are protected and given equal opportunity to thrive’’.

She described the empowerment as available to all citizens who need it without consideration for tribe, gender, religion or political affiliation.  She added that trainees of the various vocational centres who were unable to raise capital for take-off were targeted.

Dada further stated the commitment of her Ministry to sustainably Reduce Poverty through the R8 Vocational Centres in the State offering training in 20 Vocations.

In a message to the occasion, the First Lady represented by the wife of the Attorney General – Mrs. Olabisi Onigbanjo urged beneficiaries to utilise the equipment so as to become self reliant.