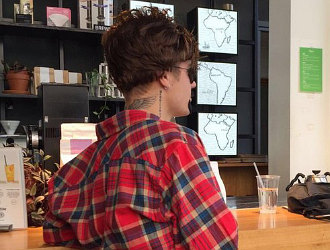 Justin Bieber was spotted wearing ridiculous and hilarious disgues while stepping out in Amsterdam on Friday, October 7.

The “What Do You Mean” crooner sported a brown wig, black moustaches and sunglasses while grabbing for coffee.

In two photos shared by a Dutch journalist Charlotte Bouwman, Justin was seen sitting at the counter of a coffee shop by himself wearing a red plaid shirt and cream trousers. Charlotte wrote, “OMG OMG OMG @justinbieber IS REALLY HIM HE IS A MAN HE IS DRINKING COFFEE AND THEN HE PEE AND PERHAPS s***s !!!!”

In a video shared by another fan, Justin was joined by his security guard when leaving the coffee shop. At one point, the “Cold Water” hitmaker approached some girls in the streets and asked, “Does this look real?” His bodyguard, meanwhile, asked a fan who recorded it to put down the camera.

Justin is set to perform at GelreDome in Arnhem, Netherlands on October 8 and 9 before beginning the U.K. leg of his “Purpose World Tour” which includes four nights at London’s O2 Arena.