In past week, there have been speculations about what actress Tonto Dikeh really went to do in South Africa in the month of May.

While the actress maintained that she went for a church appearance being a special guests at the Youth Conference of Enlightened Christian Gathering Church, there are those who have insisted that she is lying.

According to them, the actress actually went to South Africa to sleep with a pastor named  Shepherd Bushiri. Her accuser, an Instagram handle, revealed that the actress got N18 Million Naira and refused to share with her link person.

Though Tonto had earlier refused to comment on the issue, she recently changed her mind, releasing the chat between herself and a representative of the church  in South Africa via  her IG page. The chat, detailed her conversation with Brenda, the  church’s representative.

The actress thus denied the allegation that she was involved with controversial South African pastor.

In the post she shared online this afternoon, Tonto narrated how she was contacted by the church to speak at the conference and how she shared the money given to her with her makeup artiste and the lady that contacted her from the church.

”A certain story has been brought to my notice. I was however, unable to respond due to my busy schedule. That was a particularly busy week for me as my focus was on several of my charity events. It was the World celebration against HUMAN TRAFFICKING week and as a NAPTIP AMBASSADOR I was actively busy.

Firstly, I want to state that I do not write this in favour of anyone but to Make my son proud when he grows up…
*****
A while ago I was contacted by a church in South Africa through the churchs administration representative by name Brenda.

I was contacted for a YOUTH seminar and I requested to bring along a couple of people with me which included my makeup artist @vugo24 ,  family and a friend who had always adored the gospel of this said church…
I was paid an appearance fee and out of the kindness of my heart, I shared a portion of my fee with Brenda, the above mentioned friend and my makeup artist.
***
I gave what I could each person at a time,Job was done I packed up and left back to being a mother and a humanitarian..
****
I was never invited to S.A by any friend, nor was I introduced to the church by a friend in NIGERIA or outside the country for my visitation… I really would have let this slide but I cannot be silent and have my good name tarnished and be linked with such horrible and shameful act
I can not speak for anyone else but myself…
****
A warning to whosoever is behind this falsehood, peddling all these malicious rumours, I would advice you to stop.
There are things I wouldn’t take likely especially now as a mom. *****
I do not want to be roped in with the names of people who do this(Sleep with pastor) scandalous act…
I Go to church to serve my God and could care less about anyone else. Going to church is an avenue where I contact with my creator and not do otherwise…
I am a Christian, I am GROWING each day in GODS VINE yard but I wouldn’t sit and watch my good name go up in flames over a malicious EVIL story…
*******
BEWARE
TOO LATE TO FAIL NOW GUYS,GIVE UP!! 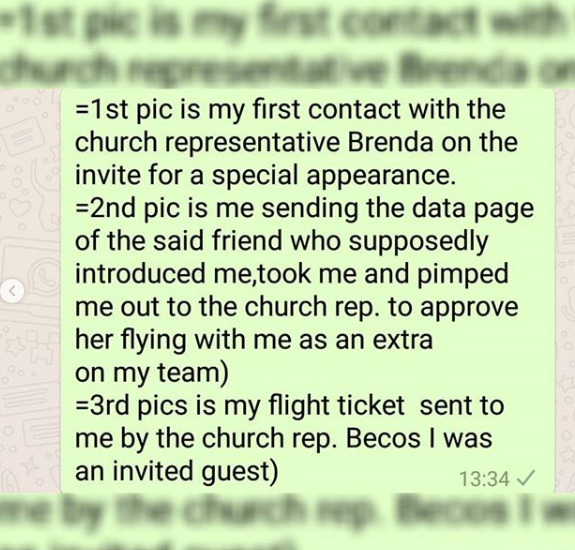