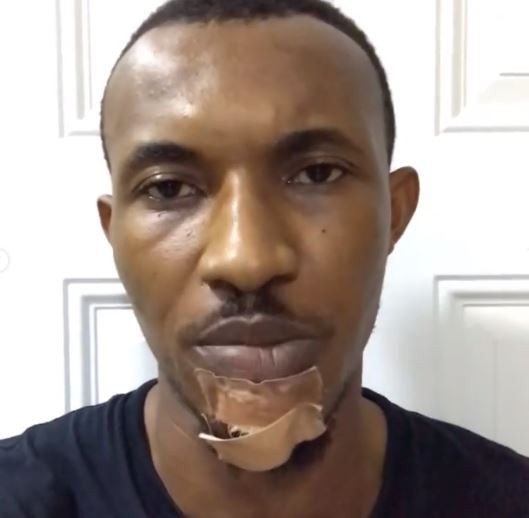 Star actor, Gideon Okeke has narrated how he escaped death in the hands of officers of the Nigerian Police Force and Lagos State Traffic Management Agency (LASTMA).

Having just left a meeting at Eko hotel, the actor revealed he bumped into another driver at Lekki Phase 1 roundabout and tried to get off the road having had an understanding to that effect with the other driver identified as Mrs Ilori.

For just seeking assistance from the officers on the roundabout to remove some of the road barricade, the actor revealed he got the beating of his life from four police men and LASTMA officers led by a police officer identified as Ideh Donatus.

According to the actor, Donatus even threatened him with a gun pointing the gun to his chest severally.

Speaking on his experience, the actor said, ‘yesterday, after I had finished from a scheduled meeting with Charles Otudor I left the Eko Hotel and joined the gradually building traffic leading on to Lekki’.

He went on to say:

Only a few minutes from my meeting, had I unfortunately run into a minor collision with another driver, Mrs Mosunmola Ilori, at the Lekki Phase 1 roundabout. We both inspected the damage(s), conferred and thought first, to get off the road for oncoming traffic.
Just less than 10feet away from all this were the Lastma and Police, sharing the police post at the roundabout.

All I asked, was their assistance (witnessed by Mrs Ilori) in getting some barricades off the road for us to park properly and this scenario I have just described, turned into a full blown fiasco, seeing 4 police officers pounce on me and 2 others on Mrs Ilori and her niece. I have come off this incident with stitches in my mouth and chin. Mrs Ilori as well, to the full glare and amazement of pedestrians and moving traffic, was ruffled up, beat, and dragged on the tarred ground. The Leading man here was one Officer IDEH DONATUS who severally pointed a gun in my chest.

I hereby humbly call on the executive governor of Lagos state, @akinwunmiambode the Vice President @profosinbajo the @policenglagos and its Officers, to kindly exercise the authority of your offices in addressing these civil injustices filed at the #MarokoPoliceStation

Myself, Mrs Ilori, her niece and every other Nigerian citizen, don’t need to feel vulnerable with the police. We appreciate them for their efforts in Protecting Lives and Property,but not for them to be THE THREAT!

THE VICTIMS LIST IS OPEN-ENDED.
POLICE BRUTALITY MUST STOP!
TAG THE STATE GOVERNOR
TAG THE POLICE COMMISSIONER
TAG THE NIGERIAN POLICE
TAG A PERSON OF INFLUENCE

Why I Apologized To Daddy Freeze-Bovi