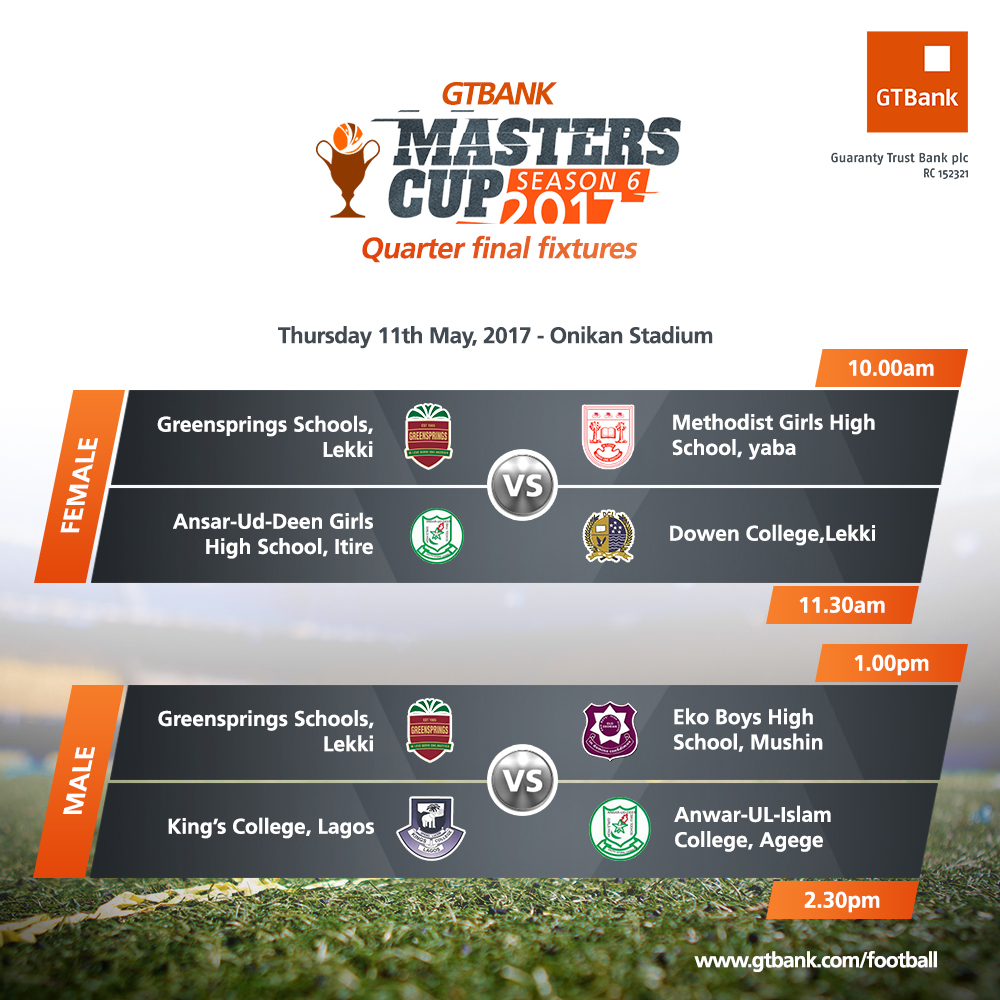 We are down to the Round of 8 in the GTBank Masters Cup (Season 6) after a rather cagey but action packed group stage that had all the trappings of an extraordinary tournament, which has so far featured spectacular goals, exceptional talent and breath-taking football skills.

The quarter finals stage of the prestigious football tournament will feature 8 games that will see the last 16 teams in both the male and female categories of the competition continue their quest to clinch the highly coveted trophy.  The Quarter finals game will be played at Onikan Stadium, Lagos on Thursday 11th & Fri 12th May 2017.

On Friday, the female teams will again set the ball rolling as the team with the most win in the competition Queens College, Yaba face International School Lagos, Akoka, just as Greensprings Schools, Lekki will compete with Methodist Girls High School, Yaba.

In the male category, 2014 winners, Eko Boys High School, Mushin will try to eliminate the current title holders, Greensprings Schools, Lekki in the 1st match while Kings College, Lagos will slug it out with Anwar-Ul-Islam College, Agege in the 2nd match.

Seven out of the sixteen teams that will be playing in the quarter finals have won the tournament in the past and will be looking to repeat the feat.

It will be two days of exciting and thrilling encounters between the schools, all football lovers are invited to be a part of the soccer fiesta.

This 6th season has already produced an exciting array of football skills and talent, and the quarter-final games are sure to raise that excitement with eye-catching match ups.

HOW THE QUARTER FINALISTS EMERGED

*Walkover – One team does not show up and the other team automatically qualifies for the next round.

Match 2 – Methodist Boys High School, VI did not show up

Match 4 – Western College, Yaba did not show up

PS: There’s no 2nd Round in the female Category, they moved from group to quarter finals stage due to the number of teams.

Players to look out for

5 Ways to break out of your comfort zone