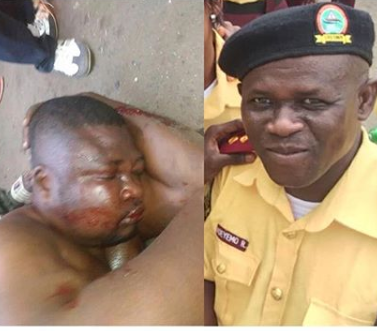 The death of Olukunle Olonade, the Police Inspector who shot dead a LASTMA officer identified as Rotimi Adeyemi in Iyana Ipaja has been confirmed.

Olonade attached to FSARS Ikeja was alleged to have shot Adeyemi to death in Iyana Ipaja, Lagos state on Wednesday, November 28th.

Incoming report have it that he died shortly after arriving at the hospital having been beaten to a polp by a mob after he shot Adeyemi.

Confirming Olonade’ death, a statement from the spokesperson of the state police command, CSP Chike Oti, said the state commissioner of police, CP Edgal Imohimi, has ordered the FSARS officer be tried posthumously.

On 28/11/18, at about 1800hrs, the driver of a Toyota Highlander SUV, with registration number LSR 277 BJ, later identified as Police Inspector Olukunle Olonade attached to FSARS Ikeja while driving along Iyana-Ipaja road, was contravened for driving against traffic by a LASTMA official, one Rotimi Adeyemi, aged 46 years at Iyana-Ipaja roundabout.

The two men vehemently disagreed with each other. However, during the altercation, the said Inspector Olukunle Olonade allegedly shot the LASTMA officer to death.

Consequently, irate mob, who thought that the shooter was an armed hoodlum because he was in mufti, decended on him and beat him to stupor.

Although he was later rescued by teams of policemen drafted to the scene, he later gave up the ghost while being rushed to hospital for treatment.

The serial number of the pistol recovered at the scene was checked in the system and it revealed the bearer as Inspector Olukunle Olonade attached to FSARS Ikeja.
Corpses of the deceased have been evacuated to the morgue for autopsy.

The CP Lagos has directed that the late Inspector Olakunle Olonade be tried posthumously in Orderly room and be recommended for dismissal from the Force.

Save Our Soul from Gov. Wike’s Killer Militia – TCCO