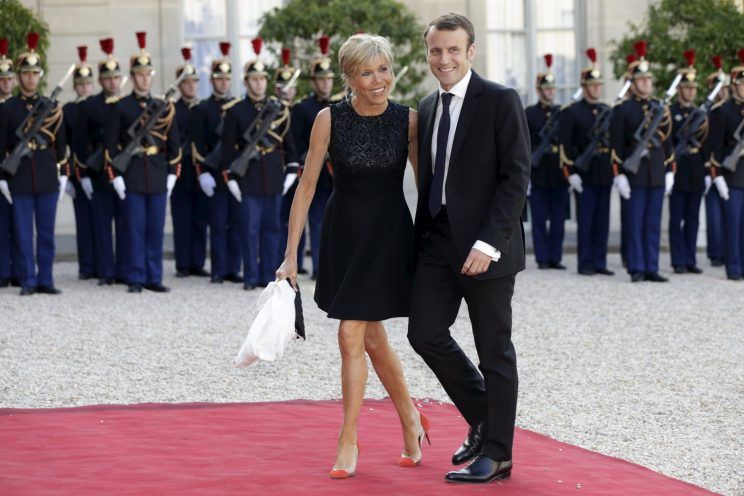 As France prepares to hold the first round of voting in its presidential election Sunday, one prominent, far-right candidate is receiving attention for her populist, nationalist policies — and her political resemblance to President Trump in the U.S. But it’s another candidate whose profile seems, at least to Americans, quintessentially French.

Emmanuel Macron is a 39-year-old former investment banker and economy minister and a current favorite in the election, which, after Sunday’s voting, will almost certainly be decided in a May 7 runoff. Considered a centrist candidate, Macron is running under the banner of the En Marche! (Forward!) movement, which he founded in 2016 after leaving the Socialist Party.

His wife, Brigitte Trogneux, is a stylish woman, with blond hair and a warm smile. She also happens to be 24 years Macron’s senior. They met when he was a high school student and she was his teacher.

Then known as Brigitte Auziere, she was married with three children and teaching French literature and drama when she encountered Macron, then just 15 years old. They bonded writing a play together, but when Macron told his parents of his interest, they sent him away to school in Paris. The two kept up a correspondence, and by the time Macron was 18, Trogneux had divorced her husband and moved to Paris to be with him. They were married in 2007.

“Nobody will ever know at what moment our story became a love story. That belongs to us. That is our secret,” Trogneux said of the origin of their relationship.

Other than using a cheeky nickname for Macron, “chouchou,” or teacher’s pet, the French press seems to treat Macron and Trogneux as a couple more closely resembling John and Jacqueline Kennedy in Camelot than Vili Fualaau and Mary Kay Letourneau.

“Our countries and our media have very different approaches to the issue of private lives of public figures,” Sylvie Kauffmann, editorial director of French newspaper Le Monde, told Yahoo News. “The fact that Emmanuel Macron’s wife is 24 years older than he is and that they fell in love when he was her student certainly did not go unnoticed in France during the campaign and has been widely discussed. The question has been put to him in many interviews. He has addressed it squarely, explaining basically that he was aware that it was uncommon, but that it had happened and worked fine.”

However their relationship began, should Macron win, they seem likely to be one of the more stable, traditional couples to inhabit the Élysée Palace. Current President Francois Hollande separated from his partner when his affair with a French actress was revealed; when former President François Mitterrand died, his mistress and their daughter attended the funeral.

The current U.S. president’s romantic past is both very public and decidedly unpuritanical — he met wives No. 2 and No. 3 while still married to No. 1 and No. 2 respectively.

“I would argue that Macron’s married life is much more conventional than Donald Trump’s,” Kauffmann pointed out.

Trump is also 24 years older than first lady Melania Trump, but it’s hard to imagine how the U.S. tabloids would treat the situation if the age dynamic were reversed for Trump’s relationship.

In France, however, Macron and Trogneux’s relationship has seemingly been a subject of curiosity without controversy.

“The one requirement is that a politician’s love life should be sincere, especially if it’s part of his public persona,” Pamela Druckerman, a Paris-based American writer, wrote of the French view of Macron and Trogneaux. “The implication is that if his love story isn’t real, his plans for the country lack substance, too.”

Macron’s own view of his relationship, which the French press and populace seem to agree with, is perhaps summarized in a tidbit from his wedding speech that became publicized over the course of the election. Thanking Trogneux’s children for accepting their relationship, Macron acknowledged the two are “not at all a normal couple — though I don’t like that adjective much — but we’re a couple that exists.

Do You Agre With Pep Guardiola: Alexis Sanchez Is Almost On Par With Lionel Messi