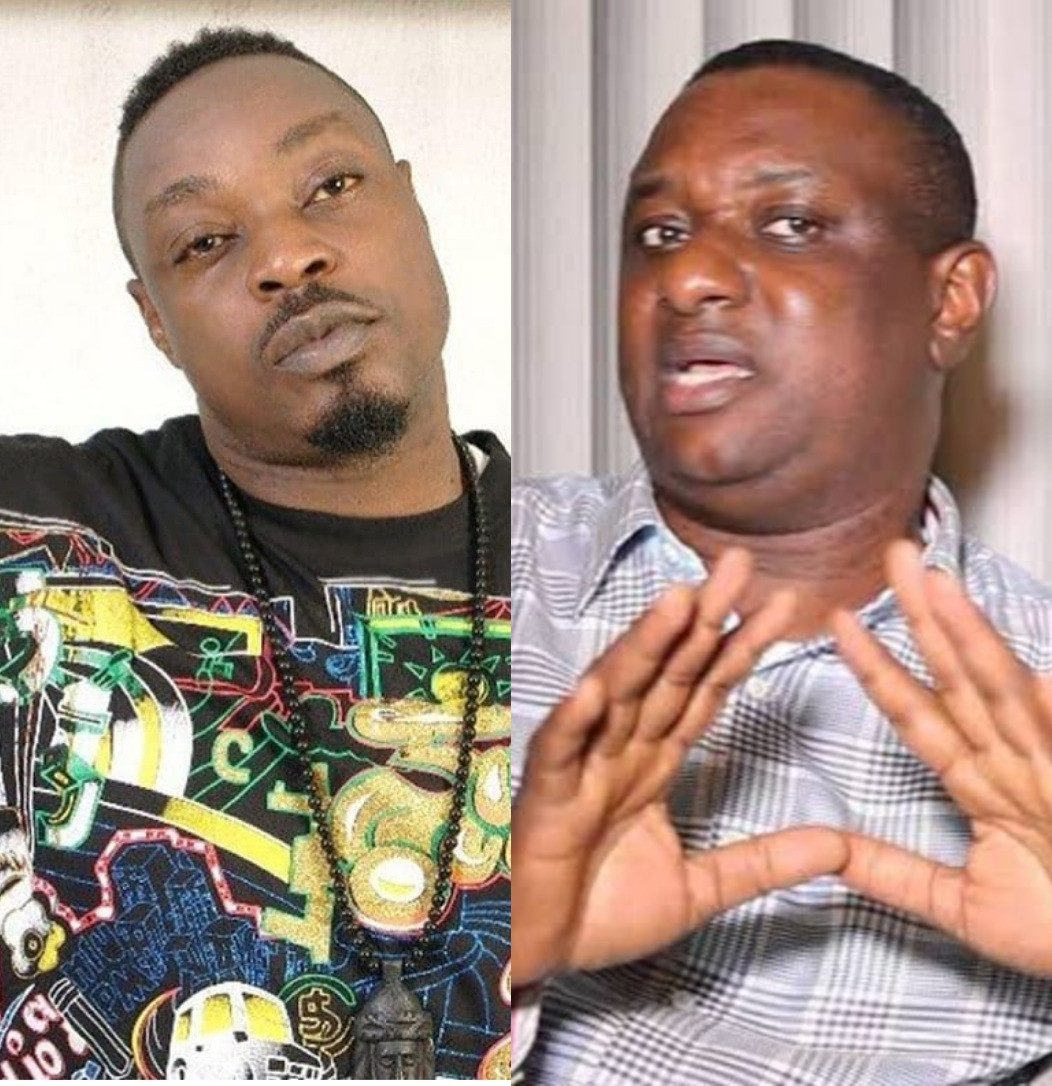 The singer had released a song titled “Jagajaga Reloaded” with a line that goes: “Where Festus Keyamo sef? He don dey chop with cabal o.”

Reacting to the song, Keyamo, accused Abdulkareem of attempting to blackmail him.

He went on to released chats where Eedris had reached out to him, asking to release a pro-Buhari song. When his request was denied, he decided to release a song, disparaging him and the Buhari-led administration.

The minister called the singer and others like him “activists-by-day-and-hustlers-at-night.”

However, reacting to the allegation, the singer accused Keyamo of turning his back on him in his time of need despite being there for him.

Abdulkareem went on to ask if anything he said in “Jagajaga Reloaded” is a lie.

“Did Festus Keyamo join the cabal or not?

“When he was in prison, I stood by him, I fought Obasanjo on behalf of all the comrades in prison, I released Jagajaga.
When my mother was dying, I reached out to a brother, or one I thought was a brother and a comrade. Could he have helped, yes, did he help, NO…such was the wickedness of his heart that he munched and kept personal details for three years…real Hallmark of a Blackmailer!

“In 2018, I still thought the man was a comrade. Thought he could effect change in the government he served. Then he joined the cabal, he became inner caucus and held the steering wheel spiralling Nigeria into doom.

“He joined to crush the revolution of the youths, he joined the cabal. The cabal which mowed down our youths at LEKKI TOLL GATE.

“The Blackmailer said I recorded a song for Buhari. The said song is titled : “Obasanjo Write Buhari Letter”. Here is the link to that song, listen and you will phantom the deviousness and dubiousness of the evil SAN (Senior Advocate Blackmailer of Nigeria) called Festus Keyamo.

“Issues raised on Jagajaga Reloaded are facts. Nigeria never had it so bad. The Jagajaga has taken a gargantuan dimension. We must keep asking questions. We must ask the cabal questions.

“Festus Keyamo don join the cabal. He is in pains because his next ambition is to be governor of Delta State. Perhaps to localise grand looting, terrorism, murdering and raping of our citizens, kidnapping, which his cabal have romanticised and packaged as banditry, and sundry other mis-governance. This is why Jagajaga ti get e! 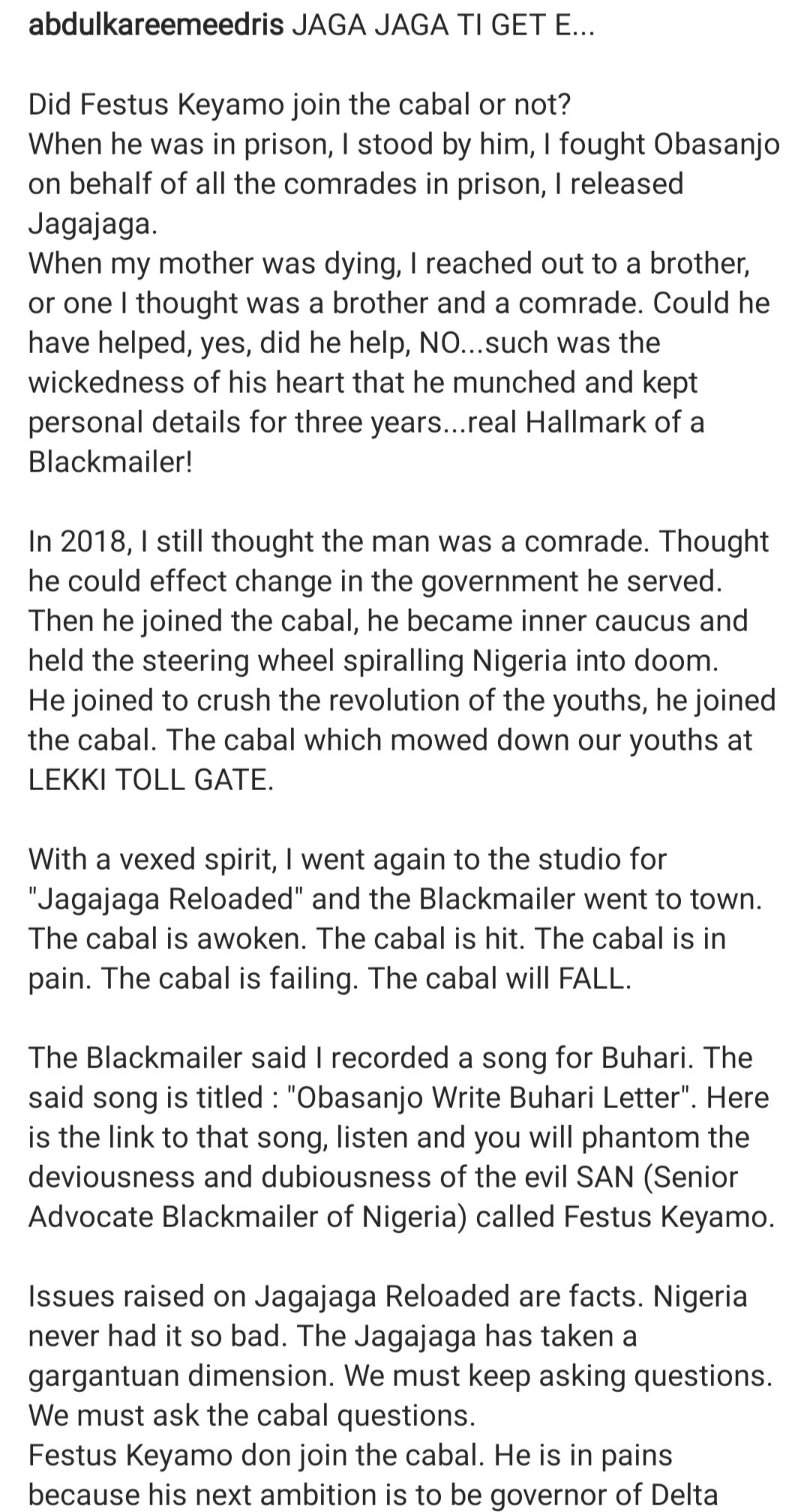 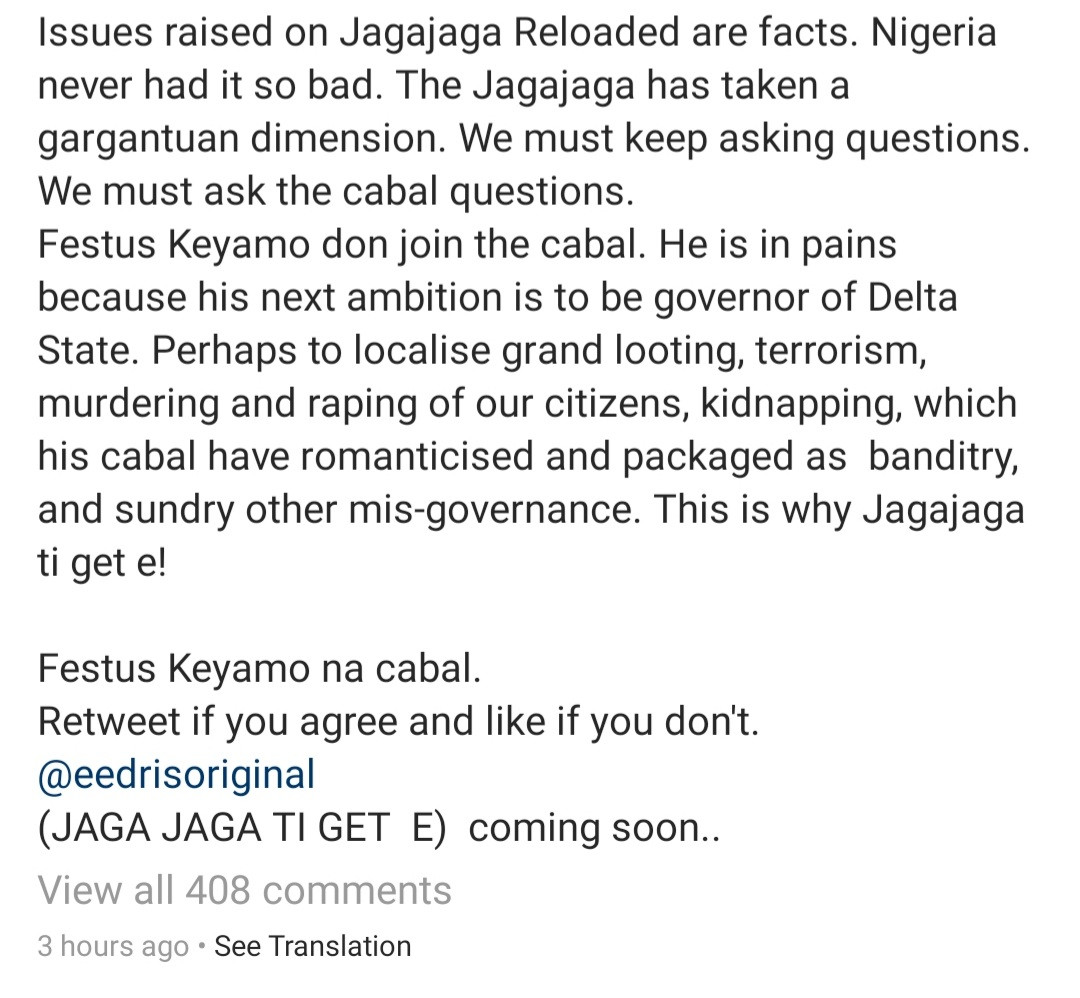 Freedom Of Speech No Longer In Nigeria-J. Martins

Shocker: See Who Is Paying For DJ Cuppy’s Masters At Oxford University