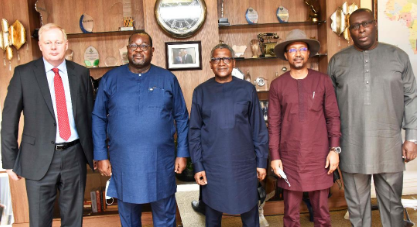 Some economists and oil and gas expert have backed the Federal Executive Council’s  (FEC) approval of the acquisition of 20 per cent minority stakes by the Nigerian National Petroleum Corporation (NNPC) in the Dangote Petroleum and Petrochemical Refinery.

They made their views known in separate interviews with the News Agency of Nigeria (NAN) on Thursday in Lagos.

NAN reports that Chief Timipre Sylva, Minister of State for Petroleum Resources, had announced the approval after the virtual FEC meeting presided over by Vice President Yemi Osinbajo on Wednesday at the Presidential Villa, Abuja.

Sylva had said the acquisition was in the sum of $2.76 billion.

Reacting to the development, Prof. Chris Onalo, Registrar and Chief Executive Officer, Institute of Credit Administration, said oil and gas remain the major source of revenue for the government which requires massive investment in the sector.

Onalo said the Dangote Group had taken the bull by the horns to make a huge investment that was needed to jumpstart the industry and therefore needed the support of all and sundry including the government.

He said the investment from the NNPC was to support the billions already committed by Dangote Group in the world largest single-train refinery.

“The refinery is an expression of massive confidence in the oil and gas economy of this country.

“It shows that the sector can take Nigeria out of economic woes. I think it is a welcome development and those of us who are in the public domain can’t wait too long to see that happening.

“So, I will say kudos to the Dangote Group for its investment drive across the economy of this country,” Onalo said.

He added that the NNPC’S support to the refinery and others coming on stream soon would increase investors’ confidence in the sector thereby attracting more investments.

Also, Mr. Muda Yusuf, an economist and immediate-past Director-General of the Lagos Chamber of Commerce and Industry (LCCI), said the Dangote Refinery was of strategic national importance.

“My views have always been that even though this is a private-sector project, it makes both commercial and nationalistic sense for NNPC to express an interest in it.

“This project has a good prospect to put an end to fuel importation and the associated leakages of public funds while also preserving our foreign exchange reserves,” Yusuf said.

He said the refinery would also stimulate the economy in areas such as job creation, agriculture, and exportation of petrochemicals to other countries.

Yusuf said: “The proposal by NNPC to take 20 per cent equity stake in the Dangote Refinery is a move in the right direction. The reality is that the Dangote refinery is a project of significant and strategic national importance, even though it is promoted by the private sector.

“Taking a stake in the project also makes a great deal of business sense, especially given how far the project execution has gone and our heavy dependence on importation of petroleum products.

“It also makes both commercial and nationalistic sense for NNPC to express an interest in a project that has a good prospect to put an end to fuel importation and the associated leakages of public funds.

“It would also ensure the preservation of our foreign reserves as we currently spend billions of dollars annually on importation of petroleum products.”

He said in addition to the several multiplier effects of the refinery arising from related spin-off industries like petrochemicals, fertilizer plants resonates well with the country’s aspiration for self-reliance and backward integration.

He added that the export prospects of the Dangote Refinery were also quite bright.

Yusuf stated that another exciting thing about the investment proposition by the NNPC was that the national oil company would be a minority shareholder and would therefore not take responsibility for the management of the refinery.

He noted that the undoing of Nigeria’s public enterprises had been the quality of management, saying as a country, Nigeria had paid a huge price for this in the form of inefficiency, corruption, wastages, and many more.

The LCCI DG further said that the model being proposed with the Dangote refinery was similar in a way to the Nigeria Liquefied Natural Gas (NLNG) Limited’s model, which according to him, remains the best example of how government funds should be invested.

“It is a model that shields the investment from interference by politicians and bureaucrats.

“This proposition is much better than the decision to commit scarce public funds to the rehabilitation of decrepit government-owned refineries,” he added.

“It makes sense for the NNPC to invest in ventures that will bring returns to the company. Every business needs good investments and this is what the NNPC is doing with the Dangote Refinery.

He said that the refinery will ensure energy security as the Refinery is capable of meeting Nigeria’s gasoline requirements while generating revenue in hard currency from the export of diesel, jet fuel, polypropylene among many others.

Chief Operations Officer, Dangote Oil Refining Company, Mr. Giuseppe Surace told the marketers that the refinery has been designed to process a variety of light and medium grades of crude, including petrol and diesel as well as jet fuel and polypropylene.

According to him, this is in addition to having a fertiliser plant, which would utilise the refinery by-products as raw materials.

He disclosed that the refinery which has recorded 90 per cent completion, was expected to address the challenge of petroleum product importation in Nigeria and other African countries.

He said, “If you look at the overall percentage completion, we have achieved good, considerable progress. But that overall includes engineering and design, which is 100 per cent over.

FIRSTBANK IMPACTS ITS FIRSTMONIE AGENTS WITH A 100 BILLION NAIRA LOAN