As the world settles to the reality of the death of Prophet Temitope Joshua popular as TB Joshua, www.theoctopusnews.com, can reveal exclusive details of how he died. 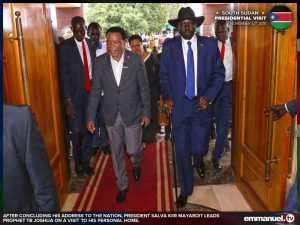 According to inside sources who spoke with www.theoctopusnews.com, TB Joshua was discovered dead in his bedroom by his wife.

The founder of Synagogue Church of All Nations (SCOAN), barely concluded his ministration before relocating to his room.

It was when his wife noticed that he was not around to attend to some of the issues he is known to personally take care of that she went to his bedroom and found him dead.

TB Joshua with children while on a trip to Ecuador

The wife we were told raised alarm and efforts to revive the man failed, as the hospital where he was taken to confirmed his cause of death as natural reason.

Meanwhile, an emisary has been sent to Arigidi, the home town of the late man of God to break the news of his death, and to finalise all burial arrangement.

Also, his church premises has been taken over by the police who have barricaded all entraces in a bid to prevent people from accessing the property.

Only TB Joshua’s inner circle friends are currently being allowed into the church premises, and this happens after serious scrutinisation