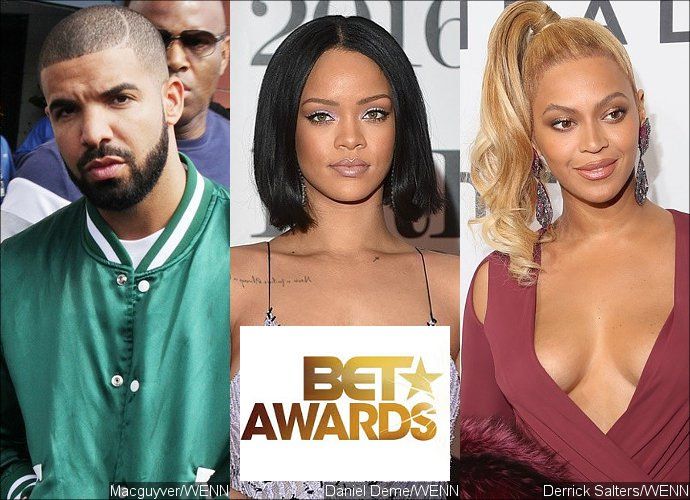 The full nominees for the 2016 BET Awards have been revealed. Drake leads the pack with 9 nods that include Best Group for his collaborative works with Future and Best Male Hip-Hop Artist, where he’s pitted against the likes of Kanye West and Kendrick Lamar.

Drizzy is nominated twice in both Best Collaboration and Video of the Year categories, and three times in the Viewers’ Choice Award category. He’s nominated for the three awards for some of his songs and videos, including his own “Hotline Bling”, Future’s “Where Ya at” and Rihanna‘s “Work”.

Trailing behind Drake are Rihanna and Beyonce Knowles, who bag five nods apiece. In addition to the prizes “Work” is nominated for, RiRi is up for the Best Female R&B/Pop Artist and the Centric Awards. Both categories also include Beyonce, Andra Day and K. Michelle.

The 2016 BET Awards will air live on Sunday, June 26 from the Microsoft Theater in Los Angeles. The nominees were selected by BET’s Voting Academy, which is comprised of fans and an esteemed group of entertainment professionals in the fields of television, film, music, social media, digital marketing, sports journalism, public relations and the creative arts.

“These nominees represent depth and diversity in achievement over the past year and we look forward to recognizing them next month,” Stephen Hill, BET’s President of Programming, commented on the nominees.

“This show will be innovative and special; in addition to celebrating the best in entertainment, we’ll also spend time throughout the show remembering Prince as only BET can. You can count on memorable performances and moments in honor of a true legend,” he added.

Video of the Year

Sportswoman of the Year

Sportsman of the Year