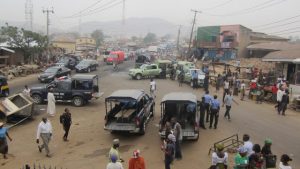 The popular saying that a man does not chase rats when his house is on fire might not apply to Ooni of Ife, His Imperial Majesty Oba Adeyeye Enitan Ogunwusi Ojaja II.

This is simply because the man seems to care little about happenings in his kingdom, Ile Ife, Osun State.

While fighting was on between opposing communities in Sabo of Ile- Ife in Osun state leaving five people dead, the Ooni and his wife, Olori Wuraola, met with British royalty, Prince Charles and his wife, Camilla, Duchess of Cornwall, at the Commonwealth day reception in London on Monday, March 13.

Many had expected that the Ooni would return to Nigeria to set his house right, but were surprised that he opted to attend to London royalty, as opposed to his own.

Interesting, is the fact that the Ooni and his wife have described their visit to the UK, as a 10-day tour to promote the Yoruba culture.

In recent time, Ooni Adeyeye has been  globetrotting, as he is said to be promoting the Yoruba culture.

Related Topics:Disdain: How Ooni Ogunwusi Adeyeye Picked London Royalty Over Kinsmen
Up Next