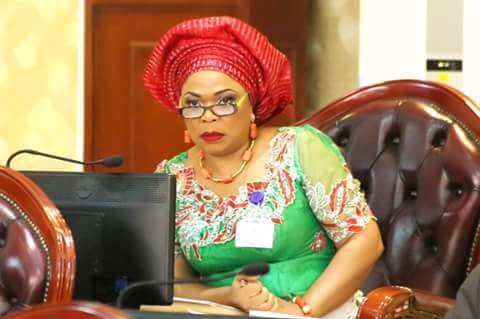 Angela Nwaka, who represents Aniocha South constituency in the Delta State House of Assembly, is said to have landed herself in a serious criminal offence over her alleged involvement in a fake Nigeria Customs Service recruitment exercise.

The lawmaker, through her media aide, Patrick Ogbogu had issued a statement on a purported Nigeria Customs Service recruitment exercise and posted same on his Facebook timeline calling on youths of Aniocha South constituency to apply for the job.

“Unemployed graduates of Aniocha South origin are kindly advised to avail themselves of this job opportunity as advertised by the Nigeria Customs Service and better your lives. Interested persons should apply using the website please.Signed Hon. Angela Nwaka, MP, DTHA.”

The press statement which was accompanied with a purported Nigeria Customs Service recruitment advertisement and the picture of the lawmaker, warned that the exercise was strictly for only indigenes of Aniocha south constituency. A social media aide to governor Ifeanyi Okowa, Lilly Udeze Okolugbo and other supporters were among those said to have been recruited by the lawmaker to convince her unemployed constituents to apply.

On reading through the statement which emanated from the office of the lawmaker accompanied with the purported Customs recruitment advertisement, a SaharaReporters correspondent contacted the Nigeria Customs Service headquarters in Asaba, but an official who pleaded that her name should not be mentioned as she was not permitted to speak on behalf of the service, described the purported Customs recruitment advertisement as nothing but a fraud.

Also contacted on the issue, an official in the zonal office of the Nigeria Customs Service in Port Harcourt, Rivers State, who similarly pleaded for anonymity, told SaharaReporters that the service is not recruiting.  He also characterized what is going on now on social media as a scam, warning Nigerians not to fall victims.

Nonetheless, an investigation by SaharaReporters revealed that hundreds of Aniocha South constituents have already fallen victim of the scam.  One source told SaharaReporters that so many of the unemployed youths of the local government have been duped of their hard-earned money following the call by the lawmaker.

An unemployed graduate from the constituency who simply gave his name as Okolo, said his attention was drawn to the statement signed by his representative and he followed all the guidelines in the Customs advertisement but before he could learn that the whole thing was a scam some aides of the lawmaker had collected the some of N10,000 from him

“I am not only the victim, there are so many other unemployed youths from Aniocha south constituency who also fell victims and [were] scammed,” Okolo said. “So many of us were scammed.”

It was however learned that following a series of petitions against Ms. Nwaka, security agents may soon step into the matter and arrest her for questioning.

Contacted, Ms. Nwaka who was mute for several seconds, claimed that she was alerting people that the recruitment was a scam, but when asked about the signed statement pasted by her media assistant, she dropped the call.

As of the time of filing this report, the lawmaker’s media aide had deleted his bosses’ statement and the Customs recruitment advertisement from his Facebook timeline.

WAYS TO IMPROVE ON YOUR NEGOTIATION SKILLS