Nigerian musician, Davido, has revealed the bone of contention in the face off between him and Burna Boy.

Recall that the duo were recently in a fight that has seen the music industry confused.

Sharing the secret behind his war with Burna Boy, Davido said that he was being beefed because his father is a rich man.

According to a post on social media to explain his war with the ‘Odogwu’  singer, Davido wrote: “They are envious of me because my father is rich”. He also went on to hint on dumping the music industry due to the reason. 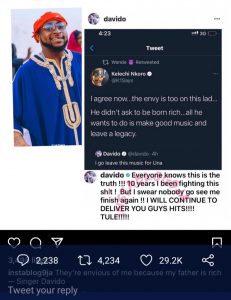 He wrote: “I go leave this music for una”. He climaxed his explanation of the real situation between him and Burna saying: “Everyone knows this is the truth!!! 10 years i have been fighting this shit. But I swear nobody go see me finish again!! I WILL CONTINUE TO DELIVER YOU GUYS HITS!!!!! TULE!!!!!!”

Related Topics:Burna-BoydavidoDavido Finally Reveals Secret Behind Crisis With Burna Boy
Up Next