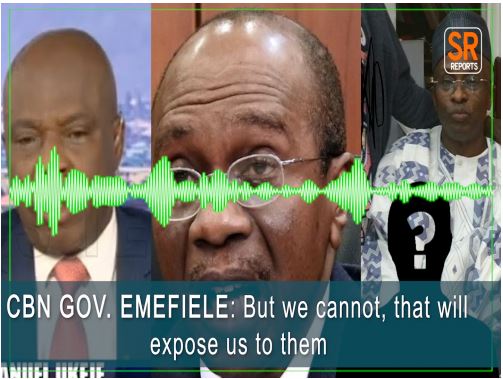 Central Bank of Nigeria governor, Godwin Emefiele, has been thrown into a quagmire following the release of a tape in which he was heard purportedly discussing how himself and some of his senior executives would cover up a fraud involving N500 billion allegedly stolen from the apex bank.

The audio which was released by Sahara Reporters claims that Emefiele and his Deputy Edward Lametek Adamu alongside the Director for Finance in the apex bank, Dayo M. Arowosegbe as well as one of the Special Advisers to the CBN Governor, Emmanuel Ukeje, were discussing on how to cover up the loss which happened in a private investment that flopped.

This Is How Sahara Reporters Reported The Story:

Two authentic telephone audio tapes exclusively obtained by SaharaReporters reveal how the governor and top officials of the Central Bank of Nigeria haggled over plots to conceal the loss of huge sums of monies in a Dubai investment according to sources at the bank.

Emefiele is heard saying in the audio to the deputy governor Adamu: “To avoid any serious problem is just, the government to have to agree to give us at least 100 billion cash but the government will not agree.They will kick against it”.

Expressing fear over what the opposition will say about the loss of the money which will slip Nigeria into hard times, the CBN governor can be heard in the audio saying: “How do I handle this? to which the deputy governor replied “we have to rack our brain and do something out because we can’t afford it at all, not at this time. Emefiele replies “the implication for the economy is, no no, no”.

“The opposition will say it should have depreciated in the project.

The tapes revealed how the top officials managing Nigeria’s central bank connived and conspired to cover up financial fraud which has affected the Nigerian economy.

Mr. Emefiele a former Managing Director of Zenith Bank of Nigeria was appointed by former President Goodluck Jonathan to head the CBN in June 2014.

Since assuming the governorship of the Central Bank taking over from now embattled Emor of Kano, Lamido Sanusi, it has been reported that the Central bank Governor has engaged in a series financial scams including foreign currency manipulation, money laundering and roundtripping to favor a group of politically exposed persons close to President Muhammadu Buhari.

He was the governor of the Central Bank when Nigeria slipped into the worse recession in 29 years.

Last week, Mr. Emefiele was renominated for a five-year tenure by President Buhari.

These audio clips show Emefiele discussing extensively with top officials of the bank to conceal the loss made with the shareholders’ funds from commercial banks, the monies were reportedly diverted to invest in Dubai to the tune of N500 Billion sometimes towards the end of 2018 and they reportedly lost that investment.

Emefiele repeatedly lamented the hopelessness of a way out of the problem: “I’ll have to think of a way out because we cannot afford it at all.

“The implications are just too many to even think about and damaging. We cannot allow this like this, we cannot” he said.

In the discussions captured on tape, top financial officers at the CBN blamed one Arowosegbe and at several points contemplated cooking up the books, discarding several ideas.

At some point in the conversation, they plotted to ask the federal government for the shortfall through the Ministry of Finance but decided against it to limit outside exposure.

As the conversation went on they didn’t know what to do to avoid a negative balance sheet for the shareholders’ fund entrusted to the apex bank.

SaharaReporters sources at the CBN say Mr. Emefiele and others in the bank eventually found a way out of their dilemma by diverting funds in possession of the CBN and also printing hard cold cash.

Rotary International To Honour FirstBank, Others