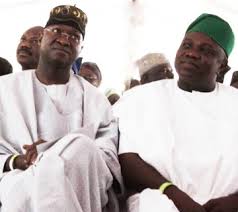 The beginning of Akinwunmi Ambode’s tenure as Governor of Lagos state saw him heavily criticizing the works and achievements of his predecessor, Babatunde Raji Fashola.

All of what Fashola had achieved for eight years simply became an omen, as far as Ambode was concerned. The projects he started and needed to be finished were abandoned by Ambode, some of which include the Ilubirin Housing Project and his unique Low Income Housing Scheme which turned a lot of people to home owners.

Go to places like Igondo and other parts of Lagos and you will be shocked at  how a lot of  Fashola’s unfinished projects have now turned into an eyesore due to abandonment.

At a point, Fashola, became a plague of sort, as no one was willing to associate with him. The man was simply in his world having been marked and put in the black book.

The peak of Fashola’s travails saw him standing alone at his book lunch, but for a few loyal friends and family who attended, he would have been in ghost island.

Fashola’s was really under the weather such that during his screening at the Senate, he emotionally told the Senators screening him that “May your loyalty never be put to test”. At that point, the man was in his lowest, as he marveled at how he had quickly moved from the friend of all to the enemy of the state.

But like the special bred he was, he maintained his place, and has been doing his job to the best of his ability, knowing that someday Ambode would see the bigger picture of what party politicis really is.

All of those happened three years ago. Today, Fashola, is a minister holding some of the most important ministries in the administration of President Muhammadu Buhari.

On his part, Ambode is on his way out of office, having set an unpalatable landmark of being the first person to spend a term in office since the All Progressive Congress (APC), took over Lagos state.

What a shame, how the cookies crumble.  Indeed, Karma is a bitch.