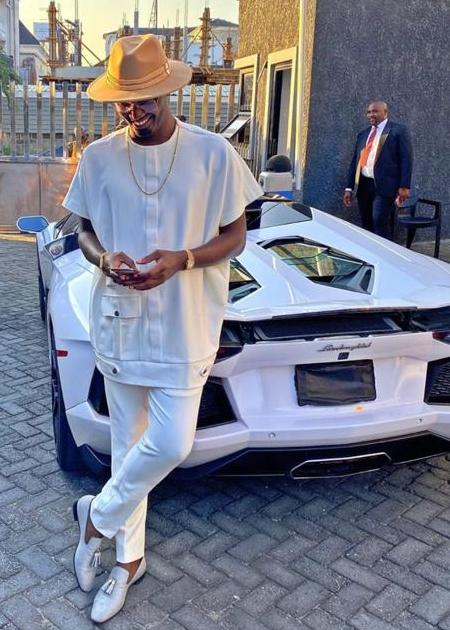 Obscene opulence, raw wealth and flagrant flamboyance seep through the Instagram page of Joseph Ezeokafor, the young man popularly known as Jowizaza. In his latest post, he is seen reclining on a plush chair inside a private jet while his security details watched over him like a protective mother hen.

In another, he leans, phone in hand, against a snow-white Lamborghini Aventador, regarded as offering the best-in-class driving dynamics, alongside its unmistakable elegance of design sportiness. Five of his security aides, garbed in a complete dark suit and bearing firearms, looked menacing enough in the background to shoot at a fly that accidentally hovers over him.

Welcome to the world of Jowizaza, the wealthy young man who commands relentless fawning and obsequiousness from celebrities and ordinary Nigerians.

In his mid-30s, Jowizaza lives large in Banana Island, the haven of the prosperous and preeminent in Lagos. Dark-hued and slim, he is not modest about his vast fortune; he displays it for the world to see through his fast cars – regarded as one of the most expensive fleets in Nigeria – his rock-star globetrotting to the most idyllic locations in the world and designer wears.

Oh, Jowizaza fancies expensive champagnes and cognacs and buys them in clubs whether in Lagos or Los Angeles in tray-loads. And when he is out clubbing, some of his collaborators include the singers, Phyno and Kcee, and Kcee’s millionaire younger brother, E-Money. Together, they make the night bend to their will and whims. Whichever club he appears, he makes it rain drinks and money. And the ladies love him for his generousity and living la Vida Loca lifestyle while the men kowtow before him for living their wildest fantasies.

Lately, he has earned comparisons with the late socialite, Ezego ‘The King of Money’ for also fancying the habit of throwing money around like a drunken sailor.

Fondly called the Prince of Ekwulobia (regarded as the fourth largest city in Anambra State after Awka, Onitsha, and Nnewi), his country home is another testament in architectural opulence. A football fanatic, he was at the last two World Cups in Brazil and Russia and counts a couple of old past and current Super Eagles players as friends.

Pray, what does Jowizaza really do? Whilst he claims to be an oil and gas magnate, no corporate address is linked to the graduate of Madonna University, Okija and Master’s Degree holder from Coventry University, the United Kingdom. Many also say that his wealth might have come from his father, who is reputed to be a billionaire that bequeathed to him his companies, Jezco Oil and Gas and Jezco Lubricant. Jezco Oil, according to its website, began business in 1980 and by 1988 became a fully licensed oil service and independent marketer of petroleum products, and has since then continued to grow to become a household name in the downstream petroleum products marketing sector and lubricants production, sales and distribution. Chief Dr. Sir J.J Ezeokafor is listed as the chairman and managing director while Joseph Ezeokafor Jnr (Jowizaza) is listed as an executive director.

GLITZ AND GLAMOUR AT THE ALL COLOUR AWARDS 2019