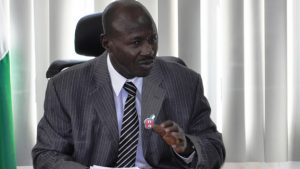 The Senate has once again failed to confirm Ibrahim Magu as the substantive chairman of the Economic and Financial Crimes Commission (EFCC).

The Senate refused to confirm Magu after the State Security Service (SSS), stood by its position that he lacked integrity to lead the EFCC.

The SSS report dated March 14 which reaffirmed its position was raised by Senator Dino Melaye.

This is the second time the Senate will fail to confirm Magu. Recall Magu was rejected last year December 15.

A portion of the SSS report read by Senator Melaye is quoted as saying thus “In the light of the foregoing, Magu has failed the integrity test and will eventually constitute a liability to the anti-corruption stand of the current government.”

Magu’s suitability was been questioned by Senators despite answering their questions.

Recall that the Presidency had in July 2016 requested the Senate to confirm Mr. Magu in a letter signed by the Vice Presient Yemi Osinbajo in his capacity as the acting president when Mr. Buhari was away on a medical trip.

6 Ways to save money on car expenses