Adekunle Gold is keeping mum over the possibility that his wife Simi is pregnant.

The songstress was spotted performing with what appeared a baby bum at an event that held at the German Embassy. And when fans drew her attention to the fact that she appeared to be pregnant, the ‘I Dun Care’ singer refuted the observation, taking to social media to write “When you suck belle, but belle don’t suck you back, can two work together except they agree?”

Although the singer denied the pregnancy claims, it did not stop her fans from congratulating her. 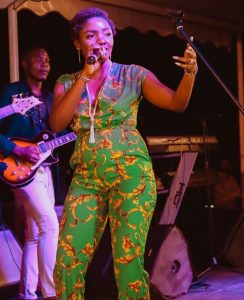 YBNL Is Still My Family-Lyta