DJ Cuppy has told Davido to add Aunty before her name anytime he wants to call her.

According to her, though they are of the same age, she is a bit older than the Davido Music Worldwide boss.

DJ Cuppy revealed this during an interview she had with the singer, sparking off laughter among her fans, followers, and Davido. 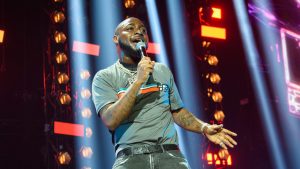 Related Topics:Address Me As Aunty; DJ Cuppy Tells DavidodavidoDJ Cuppy
Up Next

Zion Century Steps Out As An Artiste