The Oyo State Governor, Abiola Ajimobi, is definitely not remorseful about his government’s demolition of the radio station of Juju musician, Yinka Ayefele.

Ajimobi also dosent care about the criticisms that have trailed his actions. In an interview with BBC Yoruba, he confirmed giving the order to demolish the Music House saying the it contravened the physical planning law. 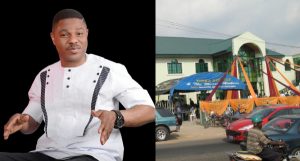 An outspoken Ajimobi even went as far as comparing the musician to an armed robber when he was quoted saying thus:

‘About the house they said we demolished, Ayefele didn’t obey the law and people came with sentiments that he’s on a wheelchair and employs people, so what? Even armed robbers employ people. The law must be upheld at all times’.

Interestingly, Ayefele, has been revealing details of both legal and other mean with which he tried to appeal with the governor not to destroy his life time achievement without success.