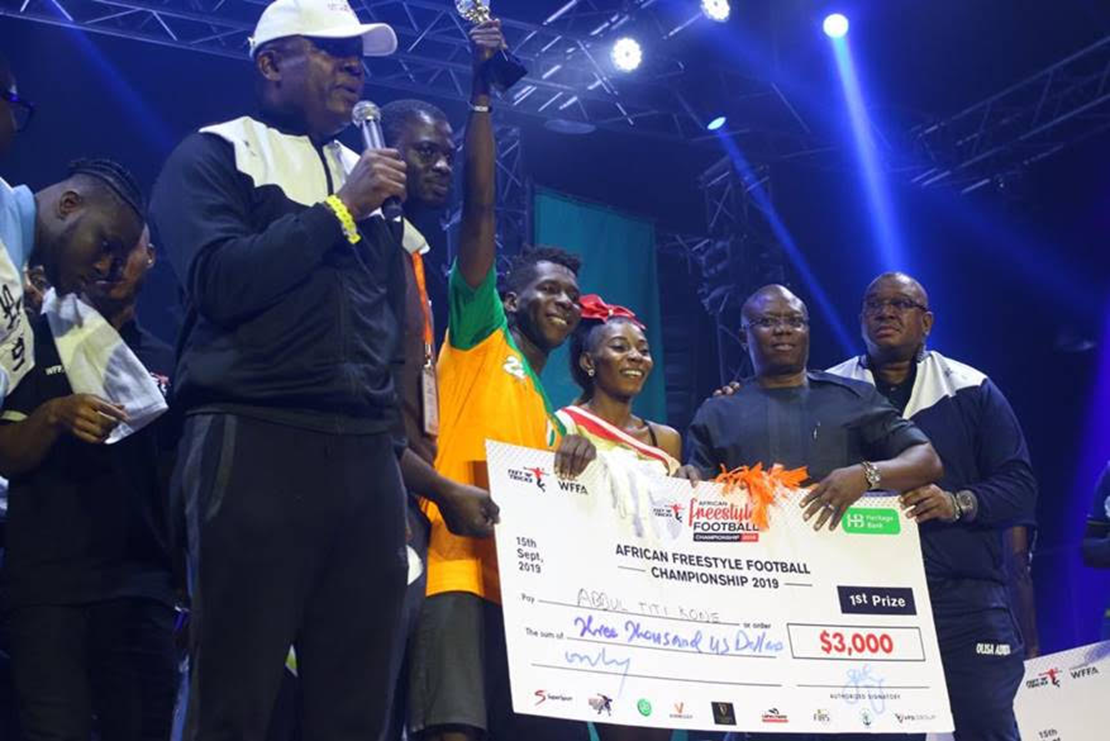 The 2019 African Freestyle Football Championship ended on a high note, with defending champion Abdul Titi Kone of Cote d’Ivoire emerging as the African Champion once again.

The final was a re-do of the 2018 championship, as Kone again defeated Egypt’s Yousef Mohamad in a head-to-head repeat of last year’s final, while Ashley Mhkize of South Africa placed third.

Speaking on his achievement, Kone said: “This is a great honour. I am thankful to Feet n’ Tricks for this incredible platform and opportunity, I look forward to using it to inspire others and make Africa proud.”

Mhkize, who emerged as the winner of the Panna Football Championship, thanked the organisers of the event saying, this would help him hone his skills and become a better individual.

“Since its inception in 2017, we have been committed to becoming world-class organisers of Freestyle Football tournaments and it’s a great pleasure to see the awareness and growth of Freestyle Football across Africa thanks to our sponsors, fans and media partners. We are confident that the sport will reach and exceed its potential in Nigeria and Africa. It has given me immense joy over the past two days to see our biggest tournament yet come to reality,” said Chairman, Feet ‘n’ Tricks, International, Valentine Ozigbo.

The event, which had a massive turn out, had musical and dance performances from Imagine to Dance, Lagos State Cheerleading Association, Chinko Ekun and the Jealous crooner, Fireboy DML closed the event with a dazzling performance.

The Nigerian Championship, which took place on the 14th of September 2019- also at the Balmoral Convention Center was well attended by local sports fans, celebrities and VIPs who were treated to musical performances, comedy, dance and freestyle contests. Benjamin John and Augustina Unamba emerged Nigerian Champions in the male and female categories respectively.

This year’s championships kicked off with regional auditions held in Lagos, Warri, Owerri and Abuja, attracting over 200 freestylers, with three in both the male and female categories qualifying for the Nigerian Championship.

The African Championship, the concluding event, was anchored by popular street dancer Poco Lee, and co-anchored by the superstar hypeman, Shody with freestylers from other African countries competing for cash and prizes valued over $43,000. Both the African and Nigerian male champions will receive an all-expense paid trip to the Red Bull World Championship event in Miami and a furniture set from Lifemate Nigeria.

Also in attendance at both events were Dan Wood – co-Founder and Head of Partnerships – and Lukas Skoda – Head of Operations; both are with the World Freestyle Football Association, the regulatory body for the Nigerian and African Freestyle Football Championships.

Our 2019 ambassadors added colour to the event with their presence, including John Fashanu, Tonto Dikeh, Williams Uchemba, Victor Ikpeba, Ifu Ennada and Ahneeka to mention a few.

Showing their unrelenting support for the initiative were sponsors and partners for the year including: Heritage Bank, Redbull, Guinness Gold, Lifemate, Federal Inland Revenue Service, VFD Group, Scavi & Ray, Vandrezzer, Eko Disco and NIMASA among others.

Guests were not left out of the fun with lucky dips, photobooth sessions, thrilling games, dance competitions and energetic musical performances from Chinko Ekun and Fireboy DML.

The African Freestyle Football Championship will be back in 2020 and Feet ‘n’ Tricks the organizers of the event promise it’ll be bigger and better.

Follow @Feetandtricks on all social media platforms for more highlights from the event.

CONFLICTS OF DESTINY AND THE DILEMMA OF FATE AND FAITH