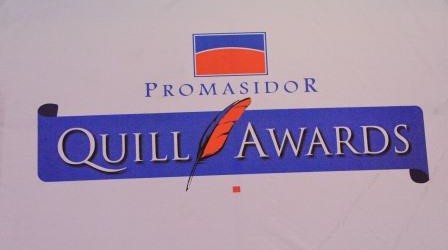 The first runner-up in the 2016 Promasidor Quill Awards, Olatunji Ololade, has commended Promasidor Nigeria Limited for the Thomson Foundation Summer Convergence Course, which is part of the overall prize for the annual competition.
Ololade, who just returned from Britain after attending the course, gave the commendation during his visit to Olivier Thiry, Managing Director, Promasidor Nigeria in his Isolo, Lagos office.
He disclosed that before he attended the course, he was a complete print journalist who had limited experience in contemporary journalism.
However, Ololade described the course as unique because it gives rare experience that does not come regularly. “I am seizing this opportunity again to express my heart-felt appreciation to Promasidor Nigeria Limited for giving me the privilege to attend the course. The training really broadened my horizon, which has practically changed my orientation to journalism”, he stated.
According to him, the course has widened his perspective beyond traditional journalism as he was so equipped to face competition from across the world. His words: “Before I travelled, I had limited experience about online journalism. I was a complete print reporter, but I discovered during the Summer Convergence Course run by Thomson Foundation and propelled by Promasidor that there was a lot more in today’s journalism profession.”
He stated that with the help of the training he had on podcast, he can now shoot video in series with his phone. The experience gained during the course, he said makes journalism more captivating to him.
Ololade also added that the course gave him the opportunity to network with journalists, who are also investigative reporters from different parts of the world. He revealed that he currently networks with them on global story ideas.
Welcoming him to his office, Thiry said he felt fulfilled as Ololade was practically equipped by the Summer Convergence Course.
The Promasidor boss stated that part of the goal of Promasidor Quill Awards is to impact positively on the quality of journalism profession in Nigeria such that the quality of the reports circulated is high and the content is accurate.
According to him, quality training of journalists is part of the prerequisites needed to improve the essence of news reporting in any society.
Ajibola Amzat, a journalist with The Guardian newspaper, won the overall prize.  For winning the medal early in the year, Amzat was supposed to attend the Summer Convergence Course, but the timing coincided with that of the master’s Degree programme he was going for in the US. As a result of that, he ceded the UK training to Ololade.
While Amzat’s write-up, Home Away, was adjudged the best entry; Ololade’s Sorrowful Song from the Valley of Iva was picked as the first runner-up in the 2016 edition of the competition.

Why The Oppoaition Is After ABS Managing Director