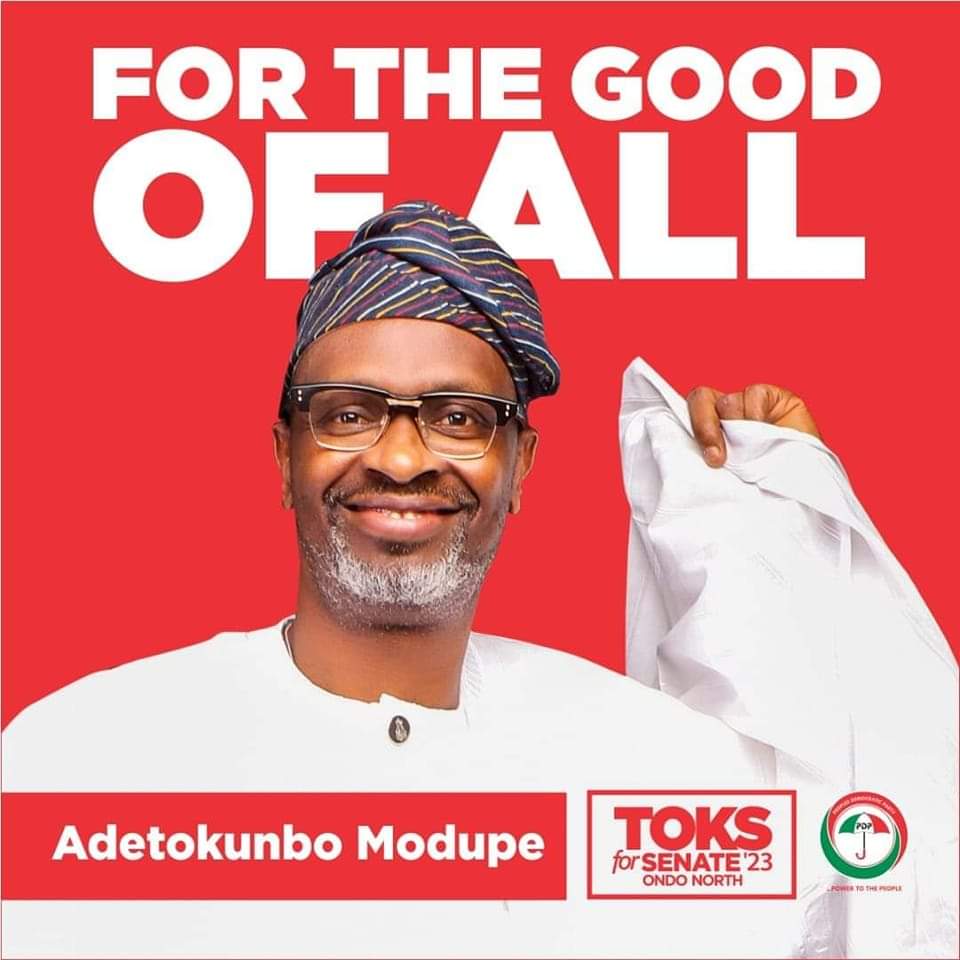 The speculation follows the reappearance of Modupe’s election posters as he continues to eye the office of senator.

Only recently, the man picked up the form for declaration of interest in the Abuja office of Peoples Democratic Party (PDP), expressing his interest in a post he failed to get to four years ago.

Recall that Modupe had hoped to contest the last senatorial election on the ticket of the opposition party, PDP, but lost in the primary to Oluwasegun Philips-Alonge.

Philips-Alonge, who defeated Modupe in the primary went on to contest the election but was defeated by the candidate of the ruling All Progressive Congress (APC), Robert Ajayi Boroffice, who won 30.30 per cent of the votes, while Philips-Alonge received 18.76, with the rest of the vote shared by the other parties that contested the election.

Since that defeat at the primary, nothing much has been heard of Modupe politically, until the recent emergence of his election posters.

Not known as a grassroots politician, Modupe is basically a Lagos-based businessman who visit his home town occasionally in a bid to keep the embers of his ambition alive.

However, as it stands, the odds are not in favour of the Managing Director and Chief Executive Officer (CEO) of TPT International Limited. If Modupe as much as becomes his party’s candidate, he will be contesting against an opposition candidate endorsed by the Senator who represented Ondo North Senatorial District at the 9th assembly, Senator Boroffice, who asides from having the power of  incumbency has the blessing of the governor  of the state, Governor Rotimi Akeredolu.

Apart from this, Modupe would also have to face the might and structure of a thoroughbred politician who is notable for engaging and consulting stakeholders of his party to know what they truly need while providing it.

Though there have been criticisms against Boroffice since he formally declared his ambition to contest the 2023 presidential election, this has not stopped him from continuing his pursuit of Nigeria’s biggest political office.

Boroffice has been slammed over his style of giving back to his constituency, his development projects and the manner of employment he has embarked on since assuming office, there are those who insist that he is perhaps one of the best things to happen to his constituency.

Findings by https://www.theoctopusnews.com, revealed that Boroffice is more favoured to win any election held in the constituency presently, having won the heart of his people via his many empowerment programmes.

Today, Boroffice is renowned among youths, men and women in Ondo State specifically Ondo North Senatorial district as the only person to have appointed 72 aides in his bid to create employment in his constituency.

At other times, Boroffice empowered a total of 100 women, and youths who participated in the fashion design skill training which held at the modern skill acquisition center in Oka Akoko. The participants were presented with sewing machines.

The senator also presented two ambulances to the annexes of the Federal Medical Center, Owo, Akokoland. Interestingly, the empowerment programmes of the senator has been ongoing for about 11 years.

However, not everyone seems to be contented with Boroffice. Ayodele Adeniyi who spoke with www.theoctopusnews.com, was of the opinion that the empowerment of the senator has been basically amongst his party and ward leaders, adding that the masses are yet to feel the dividends of democracy through Boroffice’s office.

According to him, providing scholarship for less privileged individuals without links or relationship to the senator is the kind of empowerment that people really want to see in the community. He discouraged the idea of giving cars and tricycle to party leaders in the name of employment, questioning the number of people who have truly benefited from the empowerment.

Be that as it may, it is on record that almost three years into Senator Boroffice’s first term as a senator, specifically in 2014, he put together what is still considered the most colourful empowerment programme in the state, as he gave out diverse items to over 300 selected people from the six local government that makes up Ondo North Senatorial district.

The items given out on the day included 22 cars, 50 Tricycles, 70 Generators, 70 Grinding Machines, 50 Sewing Machines and 20 Wheel Chairs for the handicaps.

Without mincing words, Senator Boroffice is a force to be reckon with in the politics of Ondo State, and his anointed candidate is the person that Modupe will be contending with if he is lucky enough to win his party’s ticket today.

Evil, Politics Will Not Divide Nigeria-Tinubu