A drama between musician Yinka Ayefele and Gov. Abiola Ajimobi has reached its climax.

Following the demolition of Yinka Ayefele ‘s Music House which housed his Fresh FM, the musician had gone to beg the number one citizen of Oyo state, leading to the reconstruction of the controversial house which was said to have lacked some necessary documentations.

Following the completion of construction work sponsored by the state government, Ayefele has taken time out to thank the governor.

The musician who had appealed to the public via social media while the controversial demolition took place also reached out to Ajimobi to say thank you for rebuilding the property via Instagram. 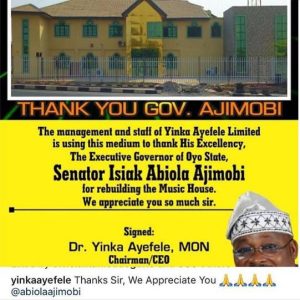 Singer, D’banj Is Up To Something