Weeks after the Osun State gubernatorial election that saw Senator Ademola Adeleke emerging as the governor-elect of the state, Primate Babatunde Elijah Ayodele, Spiritual Leader of Inri Evangelical Spiritual Church, Oke-Afa, Lagos State, has revealed why he miscued on the outcome of the election.

Recall that at a Press Conference held on Saturday, July 9, to unveil the latest edition of his compendium of prophecies, “Warnings To The Nations 2022/23 And Beyound”, the prophet of God had categorically stated that Senator Adeleke of the Peoples Democratic Party (PDP), would not win the election.

Primate Ayodele had said: “Tell Michael Jackson, that one dancing about in Osun State to stop wasting his time, he can’t win the election.”

The election was held on Saturday, July 16, and shockingly Senator Adeleke was declared the winner on Sunday, July 17, by the Independent National Electoral Commission (INEC). The INEC Chief Returning Officer for Osun State, Oluwatoyin Ogundipe, who announced the result said the PDP candidate scored 403,371 votes to emerge victorious.

While the result threw Osun and other PDP states into jubilation, it confused followers of Primate Ayodele, a man regarded as one of the most accurate seers as far as prophecy is concerned.

With over 10,000 accurate prophecies to his credit, there was no immediate explanation for the development in Osun State. That Primate Ayodele was also not immediately available to react to the situation made the matter more confusing.

An analyst, Joel Nnaemeka, who analysed the situation and could hardly find an explanation, eventually concluded that everyone would have to wait till Primate Ayodele is ready to reveal what went wrong.

In an exclusive interview with www.theoctopusnews.com on Monday, August 1, during a low-key empowerment event at his church, a relaxed Primate Ayodele stated that he would not deny saying that Senator Adeleke would not win the election.

Primate Ayodele needs no introduction both in the areas of prophecy and philanthropy. To date, he is regarded as one of the most philanthropic men of God with his empowerment programmes being acknowledged and endorsed around the world.

As of today, several prophesies have already come to pass in Primate Ayodele’s most recent compendium of prophecies, Warnings To The Nations 2022/2023 And Beyound.

Some of the prophecies that have come to pass include the crisis currently engulfing the Peoples Democratic Party (PDP) National Chairman, Iyorchia Ayu. Primate Ayodele also accurately prophesied the crisis in the country’s educational, economic and security sectors. It will also be recalled that Primate Ayodele had also prophesied the attack on United Nations (UN), with the prophecy coming to pass when the UN was attacked by youths in the Democratic Republic of Congo (DRC).

Primate Ayodele’s prophecy that terrorists will attack more prisons after the Kuje Prison jailbreak was confirmed by the Nigerian Army. His prophetic warning to Dana Air also came to pass recently as the airline’s certificate of operation among others was suspended by the Nigerian Civil Aviation Authority (NCAA), following a near crash situation of one of the organisation’s aircraft. Other prophecies of Prophet Ayodele that have come to pass include the forceful exit of the Sri Lankan President from office, fire at Bodija Market, a plane crash in Greece, the resignation of the Italian Prime Minister, an abnormal heat in Europe and many more.

He also prophesied the sacking of the PDP gubernatorial candidate in Delta State, Sheriff Oborevwor, as well as the exit of United Kingdom Prime Minister, Boris Johnson; and the assassination of Japan’s former Prime Minister, Shinzo Abe.

Regarding Oborevwor, Primate Ayodele had said: “I don’t see PDP candidate, Sheriff Oborevwor coming out in flying colours if the APC strategizes well. I am warning governor Okowa to immediately swing into action because Sheriff will have issues, the PDP is risking Danger with the Sheriff, I’m not his enemy but that’s what God said.’’

On the death of former Angola President, Jose Dos Santos, his exact words were: “In Angola, let them pray not to lose the country’s former president, and in the coming election, there will be a serious election between the incumbent and opposition. If the president allows the coalition to work against him, he will lose the election, but if he works very well and does the needful, it will be difficult for the coalition to unseat him.”

Also, the man of God remains second to none in his philanthropic work. Asides from his many empowerment programmes which have become legendary, this year alone, the man of God has empowered several people including a man who he gave a wheelchair and two million Naira, women in his church who he empowered with several million of Naira, and a gospel musician, Bunmi Akinnanu, who he empowered on her birthday with a Sport Utility Vehicle (SUV).

Other empowerment that the man of God has done includes a rain of blessing during his annual thanksgiving ceremony for 2022, during which he doled out cars, Tricycles, cash, sewing machines, microwaves, JAMB and WAEC forms among several others to several individuals. On numerous occasions, the man of God who is known to also support Muslims has also given academic support to members of the public seeking to further their academics internationally. 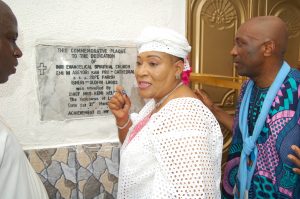 Asides, from prophecy and empowerment, Primate Ayodele has also been supportive of the Christian faith, celebrating late politician Chief (Mrs) Kemi Nelson both in life and death, while also showing his support to Prophet Joshua Iginla when he was bereaved. 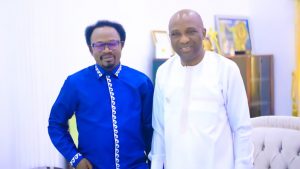 The mafia paradigm By abiodun KOMOLAFE