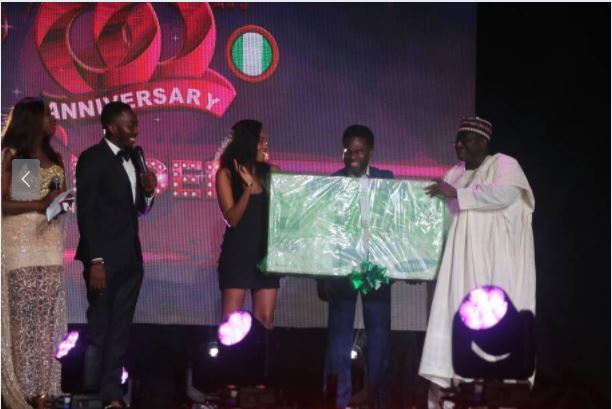 Heritage Bank Plc, Nigeria’s most innovative banking service provider has partnered with Folio Media Group, publishers of the Daily Times to organise the 60th anniversary of Miss Nigeria and the 2017 edition of the beauty pageant.

The award given to her, which was an artefact (African queen bronze head in a moulded box), speaks of African culture and symbolic of the Bank’s pride of its heritage.Miss Nigeria focuses on issues that affect Nigerian women; she is an ambassador of culture, of purpose, of the environment.

The ambition of the new beauty queen is to provide medical and psychological help for women who are victims of rape as well as empower them.Speaking with journalists immediately after the crowning of the new pageant queen, Mr. Fela Ibidapo, Head of Corporate Communications of Heritage Bank said, “We are partnering with Folio Group to empower women”, adding that this is what the Daily Times used to be known for and we wants to help them to revive it.

“Our involvement in this is not because of beauty per se, it’s primarily to empower ladies and women generally; to encourage them to always put in their best in whatever they do to make a living.”Ibidapo agreed that the impact of the initiative might not be so visible in the short-term period, but he was so optimistic that it would impact positively on their contributions to the nation-building process in the long run.   Also speaking, chairman of Folio Media Group, Mr. Fidelis Anosike said the group would use the Miss Nigeria pageant to create a strong female platform, remarking that the group has signed a partnership deal with the National Agency for the Prohibition of Trafficking in Persons (NAPTIP) over the next five years to tackle the scourge of human trafficking.

He said as part of strategy to empower contestants in the Miss Nigeria beauty pageant, the group has resolved to give five percent of its toplined revenue to be shared among them, adding that this year about N4.1million will be given to them.

Former Governor of Ogun State who also double as former Managing Director of the Daily Times, Aremu Segun Osoba noted that the Miss Nigeria beauty pageant was part of the history of Nigeria and commended Anosike for keeping the history alive.

She said she was happy that the pageant was being revived by the new management of the Daily Times because it provides opportunities for young girls who are polished, good mannered, well- spoken and poised to attain national recognition by drawing attention to causes and empowerment for women.

The Miss Nigeria Beauty Pageant which came into being in 1957 is the only national pageant in Nigeria and it represents the highest ideals of a combination of beauty, grace and intelligence; artistic and refined.

Photo Story: Pictures From The 50th Birthday Of Yakubu Dogara

OONI OF IFE, OZOLUA PARTNER TO TACKLE MALNUTRITION IN AFRICA