Zamfara State Governor, Bello Matawalle has revealed why his state backed out of a dialogue deal with bandits. 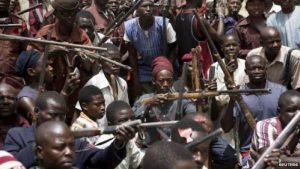 According to him, they backed out because the bandits deceived his government.

Matawalle stated this while answering questions from state house correspondents after a meeting with President Muhammadu Buhari, held at the presidential villa in Abuja on Thursday September 16.

According to the Governor, they opted to fight bandits to a logical conclusion after realizing that the bandits had deceived them.

“They have deceived us. Some of them did not follow what we agreed with them. We thought it was something we could continue with them, but we later realised that they had deceived us. So, we had to back out of it and decide to fight them to a logical conclusion.

“As you know, we are there fighting and we have taken a lot of measures in order to curtail this problem of insurgency. We thank God it’s yielding a lot of results. We’ve recorded a lot of successes from what we have done.

“As you are aware, we have a lot of security personnel that were deployed to Zamfara state and they are working seriously.”

On the security situation in the state, Matawalle said;

“It’s just that we have cut a lot of things, particularly moving of foodstuffs, animals and selling of petroleum products.

“We have imposed a lot of measures and the people are happy with the measures, because the people had suffered a lot; people were being killed and kidnapped every day before, but today we have succeeded. We don’t have many of such issues in Zamfara state.”