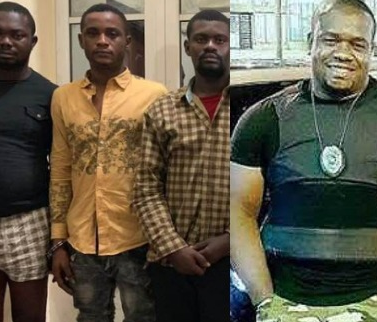 The killers of Chucks Okebata, the Nigerian-born American soldier killed by kidnappers in Okigwe, Imo State in 2017, have revealed why he was murdered.

In a statement made to operatives of the Inspector General of Police Special Intelligence Response Team, IRT, led by Deputy Commissioner of Police, Abba Kyari, his killers revealed that he forced their hand in what led to his death.

kebata, was holidaying in Okigwe when he was abducted and killed by the seven-men notorious kidnapping gang.

“He tried to disarm me and in the process was killed. If we had not killed him, he would have killed us. He is strong with tough muscles and the only way to save our lives was to kill him.

We bundled him into the boot of our operational vehicle after he was kidnapped. We didn’t know who he was. While we were heading to our camp where we hope to keep him until ransom is paid. He pulled out his gun and started shooting at us from the boot and the bullet hit me on the leg and the driver on his hand.

Realizing the danger I asked our driver to stop the vehicle. As soon as the vehicle came to a halt we disarmed him. He was killed right there on the spot. We dumped his body inside a gutter and left. I want everyone to understand that I have no intention of killing him but he forced us into doing it,” he stated.