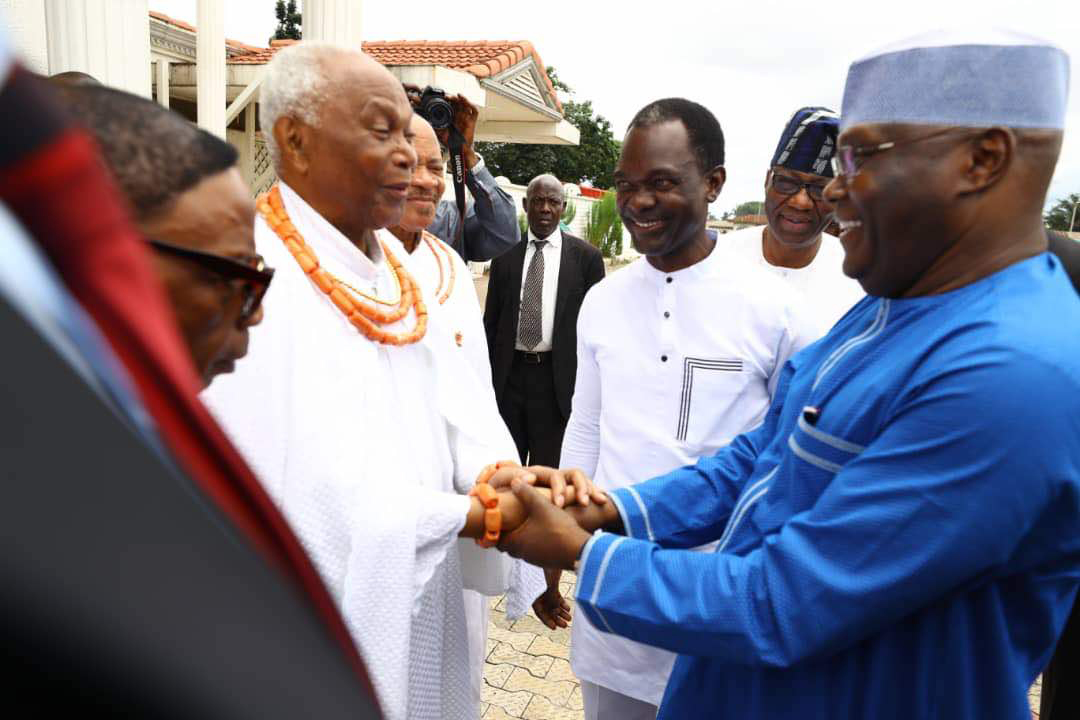 The Former Vice President and Peoples’ Democratic Party (PDP) presidential front runner, Alhaji Atiku Abubukar has stated that his quest to govern the country was driven by his patriotism and grandiose vision of a nation where everything works considering the abundant human and natural resources at its disposal.
Atiku said this while fielding questions from newsmen in Benin after a courtesy call on Oba Ewuare II at his Benin palace  on Tuesday.
My vision to put this country on the right path and ensure good governance at all spheres of our national life was the innermost reason for my quest for the presidency, not on selfish interest, he stressed.
“I am not desperate to become President. If I were desperate, I would have taken the presidency in 2003. If I were desperate, I would not have stepped down for Abiola. I have the interest of this country.”
Earlier, while receiving the former president in his palace, the Oba of Benin, Oba Ewuare II admonished politicians and political parties to ensure that only credible candidates emerge for the 2019 elections in the country.
Speaking on the level of insecurity in the country, Oba Ewuare II stated that insecurity is currently at its lowest ebb in the country’s history and all stakeholders must come together to find a lasting solution to it and ensure the unity of the country.
He condemned the happenings at the National Assembly while enjoining leaders to ensure only men of honour get into the political process.
Responding, Atiku Abubakar thanked the Benin monarch for being a voice of Unity and Peace. Reminiscing on his relationship with Benin, Atiku stated that he was trained by the Iyase of Benin Kingdon, Chief Sam Igbe, who he learnt a great deal from when it comes to leadership.
Atiku, who touched down at the Benin Airport in a private jet alongside the Director General of his campaign organisation, Otunba Gbenga Daniel, was in Benin as part of the campaign to pick the party’s ticket.
Post Views: 753