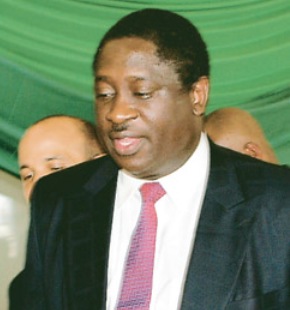 The hard times loom like a shadow and shaped like a stone around the shoulders of the unfortunate man. But Wale Babalakin was not an unfortunate man. Until now, the chairman of Bi-Courtney Limited rode the tides of time like a veteran mariner adept at navigating life’s greatest storms, into the good times. Indeed, there was a time when the name, Wale Babalakin, commanded awe and respect in the business arena and the nation’s corridors of power. Wale was a man everybody reckoned with thus the former billionaire and founder of Bi-Courtney Limited, loomed large and impressively in the nation’s industry and high society.

But having won too many battles and attained wonderful feats, Wale suddenly waded from his life of charm and grandeur into troubled waters. Recently, he ran into trouble with the immediate past administration of President Goodluck Jonathan as he got embroiled in a legal conflict bordering on fraud. By the end of the legal tussle, Babalakin, who was once a super billionaire had been sadly reduced to a former billionaire. Pundits alleged that his unsavoury encounters with the law under the administration of former President Goodluck Jonathan was responsible for his depreciation in value and worth – another school of thought however, held that Babalakin’s declining fortunes is as a result of the natural order taking its course. The latter view resonates the maxim that what goes up, must come down.

However, after years of litigation over an alleged N4.7 billion fraud by the Economic and Financial Crimes Commission, EFCC, the chairman of Bi-Courtney Limited, recently walked out of the Ikeja High Court in Lagos, a free man. Delivering his ruling, Justice Lateef Lawal-Akapo said the EFCC had failed to disclose enough information to sustain the allegations against Babalakin, and his co-defendants.

“The amended information filed May 7, 2013, is incurably bad and defective,” the judge held.

Mr. Babalakin, a Senior Advocate of Nigeria; Alex Okoh, a banker; and their companies Bi-Courtney Limited, Renix Nigeria Limited, and Stabilini Visioni Limited had been charged on a 27-count charge of fraud, conspiracy, and retention of proceeds of criminal conduct.

The EFCC accused Babalakin of helping James Ibori, a former governor of Delta State who is now serving a jail term in the UK, to launder N4.7 billion state funds.

The defendants were first arraigned in January 2013, after which began a series of court room dramas that culminated in their discharge.

Years ago, Babalakin profited from an impressive array of business interests and achievements. After making major successes in the development of real estate, including the proprietorship of a few high rise buildings in Abuja and Lagos, he, through his Company Bi-Courtney Limited, applied for the concessioning of the Lagos Domestic Airport, the Murtala Mohammed Airport 2, after the said airport was razed by fire.

Nobody gave the project a chance as it was considered too cumbersome for the capacity of a private company. Within three years of the concessioning however, and in the face of serious hostility and inconsistency on the part of government, Bi-Courtney Limited completed the new domestic airport now famously known as MMA2 which has been variously described as the best airport in Nigeria today and definitely the first airport terminal to be built in Africa with private funds without any support from the government.

Babalakin is also the Chairman of a major construction company known as Stabilini Visinoni Limited; the Chairman of Resort International Limited, a hospitality and leisure company.

In 2005, Dr. Wale Babalakin was appointed by the then President of the Federal Republic of Nigeria, Chief Olusegun Obasanjo, as a member of the National Political Reforms Conference, where he served on the Legal Reforms Committee. He also served as the Chairman of the Constitution Drafting Sub Committee which was ultimately responsible for the drafting of the constitution. He was the Vice-Chairman of the Committee for the review of the Evidence Act. He also had the unique opportunity of serving as the Chairman of two committees of the Nigerian Bar Association (NBA) namely the Real Estate and Construction Law Committee of the Section on Business Law and the Government Practice Committee of the Section on Legal Practice.

Although he has been an adviser to a number of governments, culminating in his appointment along with Alhaji Rilwanu Lukman as Honorary Advisers to the government of late President Umaru Musa Yar’Adua, who was President between 2007 and 2010, Babalakin is today less relevant than he was in that era.

Indeed, friendship is overrated. Oftentimes it leaves a man vulnerable to the elements. It was a firm belief in friendship that cost the legendary Julius Caesar his life; eventually, he was betrayed by Brutus, his bosom friend and confidant. Likewise, a trust in friendship has left Babalakin an easy mark for treacherous friends. Today, the gallant, civilised and generous man is betrayed and subjected to a ruthless heartache courtesy  some his friends who he made financially..Sad!