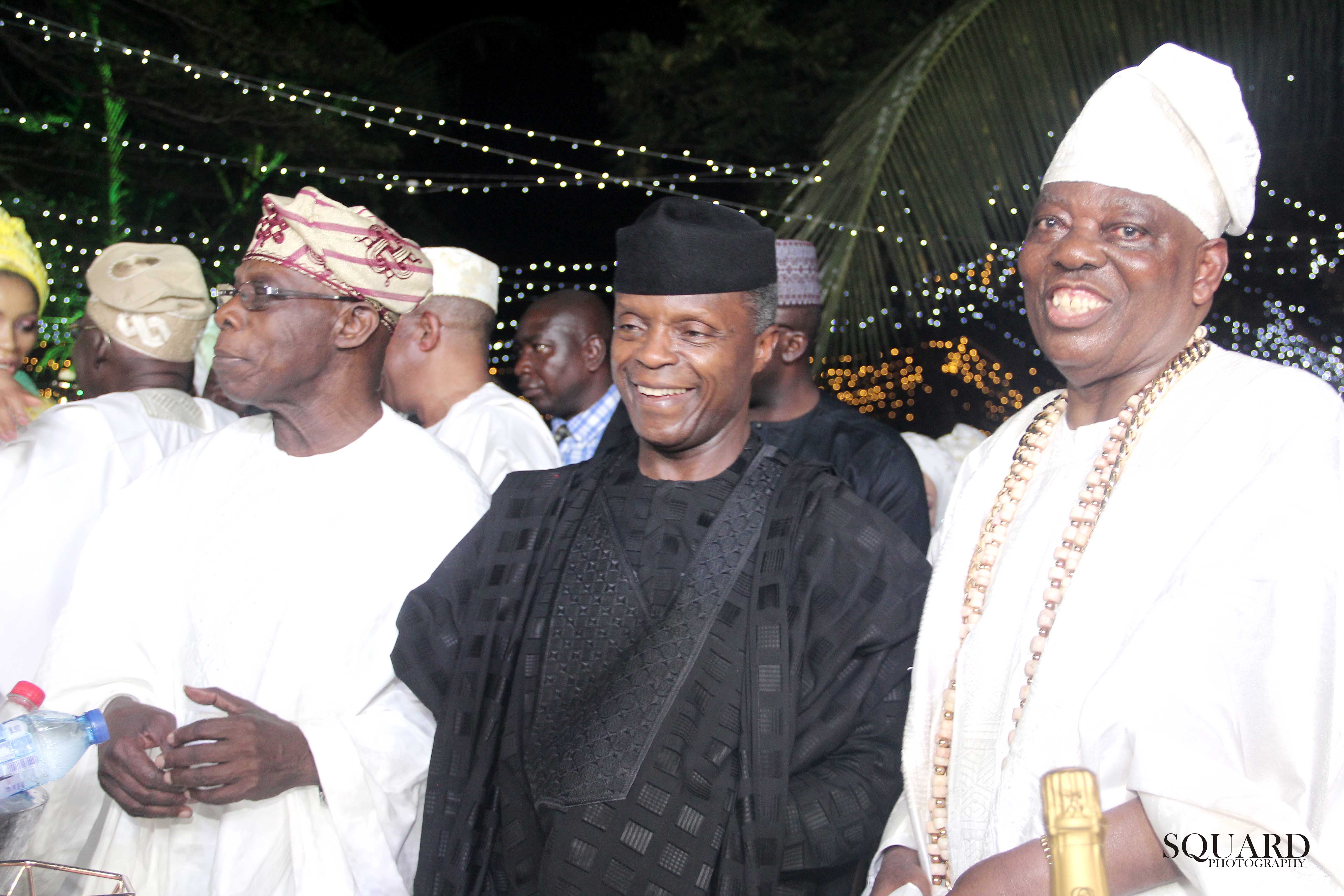 Those who witness the 80th birthday celebration of renowned industrialist and business mogul, Aare Rasaq Okoya at his panache Oluwanishola Estate will readily agreed that it was the first-class party, which will remain unforgettable in memories of those that attend the first-class party for a very long time.

The highlight of the event was the cutting of birthday cake by the celebrator flanked by Vice President Prof. Yemi Osinbajo, Former President Olusegun Obasanjo and former Governor of Lagos, Asiwaju Bola Tinubu among others.

The vice president, who presided over the cutting of the cake, prayed God to grant Okoya 100 years, preserve him and keep him in good health.

For a man who started from a very humble and poor beginning, eking out a living from petty trading, to rise to the topmost echelon as an industrial giant, it should not surprise anyone that his 80th has been celebrated in amidst pomp and the ceremony, starting with a thanksgiving prayer with him and close members of the illustrious Okoya family, led by prominent Islamic clerics.

The build-up of the much-awaited history-making birthday celebrations of business mogul, Alhaji Rasak Akanni Okoya clustered with the A-list guests as the ambiance is engrossed in anticipation of what to come. The guests were thrilled by renditions from different musicians, as the vice president and former President Olusegun Obasanjo stepped out with the birthday boy; Okoya on the dance floor.

As expected his circle of equally stupendously rich friends and associates are all gathered in his massive estate to celebrate the milestone age with him, likes of notable Nigerians that attended the event were the royal father of the day, Ooni Of Ife, Oba Adeyeye Enitan Ogunwusi, Lagos state governor, Babajide Sanwo-Olu, Minister of Information and Culture, Lai Mohammed, former Commonwealth Secretary-General, Chief Emeka Anyaoku, businessman, Aliko Dangote as well as traditional rulers.

While his youngest wife, elegant and charming Sade Okoya, she is on her toes to make sure that the commemorative birthday party was the talk in town as she has put all necessary logistics like maximum security, sumptuous dishes, vintage drinks, good music and sundry merriments in place which make the day a memorable one.

Beejay Sax performed to the entertainment the special guests and the big stage is shared by two major compares in the MC industry, Gbenga Adeyinka the 1st and Tee-A, while The 1st Mayegun Of Yoruba Land, K1 De’ Ultimate, Ebenezer Obey, King Sunny Ade, Arunna Ishola, Sir Shinna Petters, Davido and others trill the guest to unforgettable and unlimited funfair which make the birthday as a carnival alike celebration. 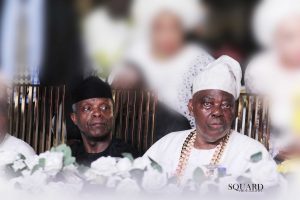 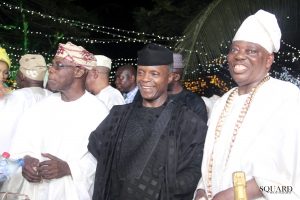 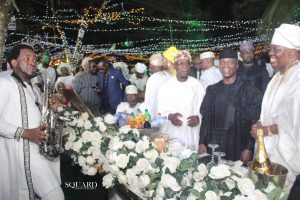 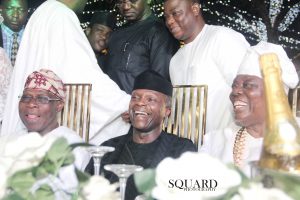 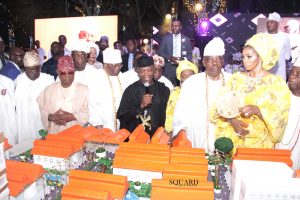 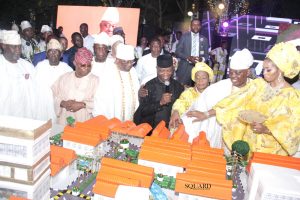 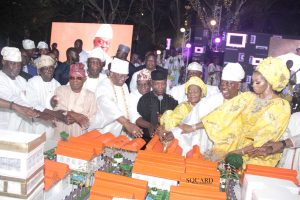 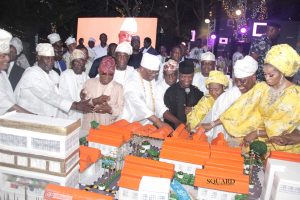 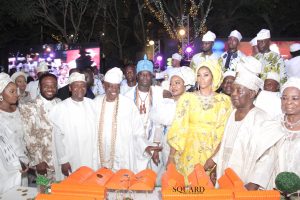 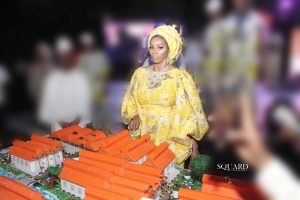 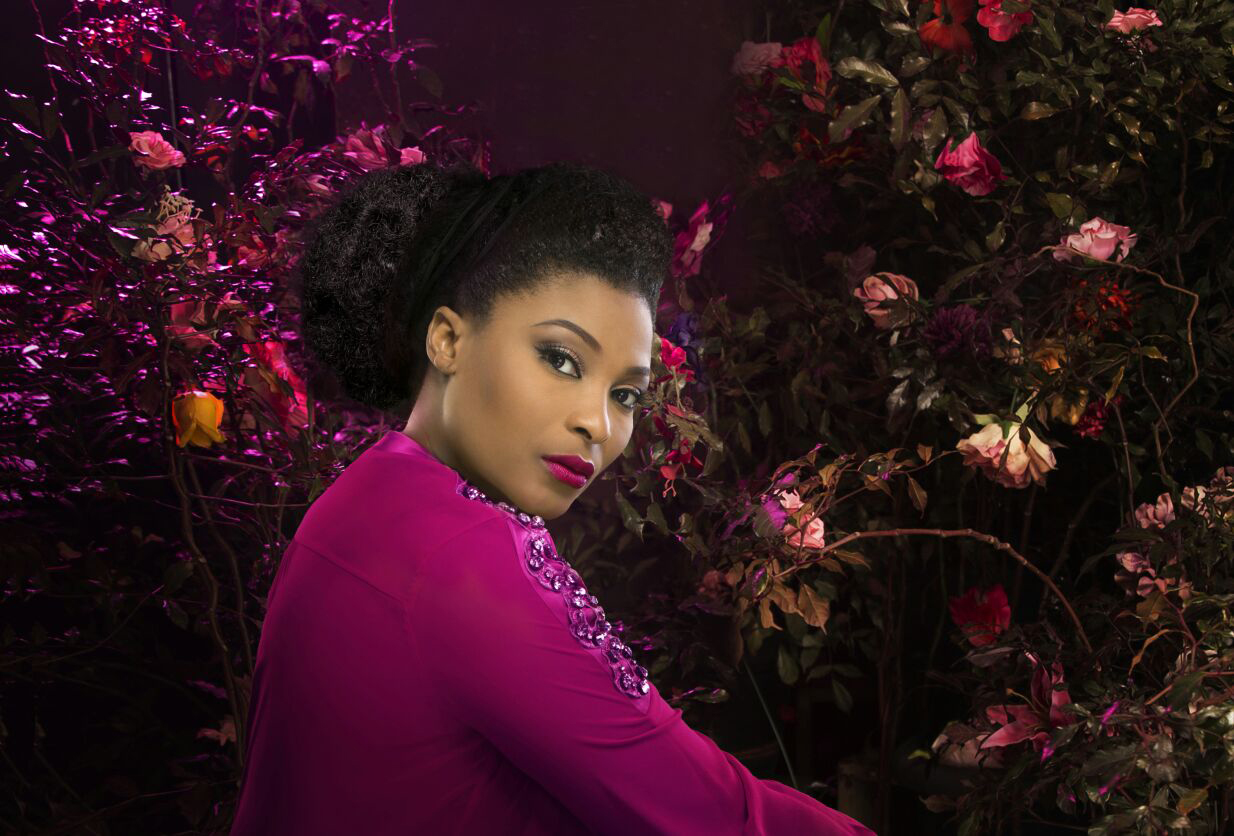 The glee on the face of Ibidun Ighodalo is a hard-earned one.

For over 13 years, the woman has fought for what she has become.

Unlike many who dated their man and smiled as they walked the aisle to matrimonial bliss, the case of the founder of the Ibidun Ighodalo Foundation was quite different, falling in love with a man in the heat of a marital imbalance from his first marriage.

This, coupled with the pain of childlessness has seen the woman going through a rough time. Through all of these, Ibidun has swam troubled seas coming out without drowning.

Celebrating her 13th wedding anniversary with husband and founder of Trinity House, Ituah Ighodalo, there is no denying how worthy she is of the celebration.

Humility is not a virtue synonymous with a lot of privileged men.

However, men with this asset attract a lot of people to themselves.

Hence, it wasn’t much of a surprise when the movers and shakers of society and captains of industry gathered to honour Primate Ayodele Babatunde Elijah, founder of INRI Evangelical Spiritual Church, Oke Afa, Lagos State when he celebrated his birthday recently.

Typical, the colourful event kicked off with a church service and spiraled into the flag-off ceremony of the United Nation’s 75th anniversary.

Present at the event were notables including President of the United Nations World Peace, Ambassador Per Stafsen, Ooni of Ife, Oba Adeyeye Ogunwusi, Governor Babajide Sanwo-Olu represented by Anofi Elegushi, Mayegun of Yorubaland, Wasiu Ayinde, Ambassador  Chinedu Anthony among others.

The celebration also served as an empowerment programme, as Primate Ayodele left smiles on the faces of less privileged individuals present.

The ancient and historical city of Ile Ife will be a Mecca of sorts on the 24th of February when the annual Aje Festival will commence. The epoch event will begin with spiritual prayers and cleansing of the entire Ife kingdom at the palace of the Loni before other activities proceed. Having as the chief host, the Ooni of Ife, His Imperial Majesty Oba Enitan Adeyeye Ogunwusi Ojaja II, and Princess Dr. Toyin Kolade as host, the 2020 Aje Festival will no doubt herald a new breath of life into the commercial and economic activities not only in Ile Ife and environs but throughout Yorubaland and the whole of Nigeria. Prayers are going to be offered by top spiritual leaders, royal fathers, and religious leaders. This is meant for the Almighty God to intervene in economic brouhaha bedeviling the growth and rapid development of Nigeria

Also Read:  Dapo Abiodun: Not A Tall Dream After All

The Aje Festival is going to be an All-White attire affair symbolizing purity, peace, unity, and progressiveness. Market women and men are also expected to display their farm product, foodstuffs, goods, and products for the array of visitors who trooped into the Cradle of Yoruba Race to savour the natural gift bestowed upon the flourishing land of Ile Ife. There will be enough merry-making and fun with lots of entertainment and dining/wining to make the 2020 Aje Festival a memorable and indelible event.