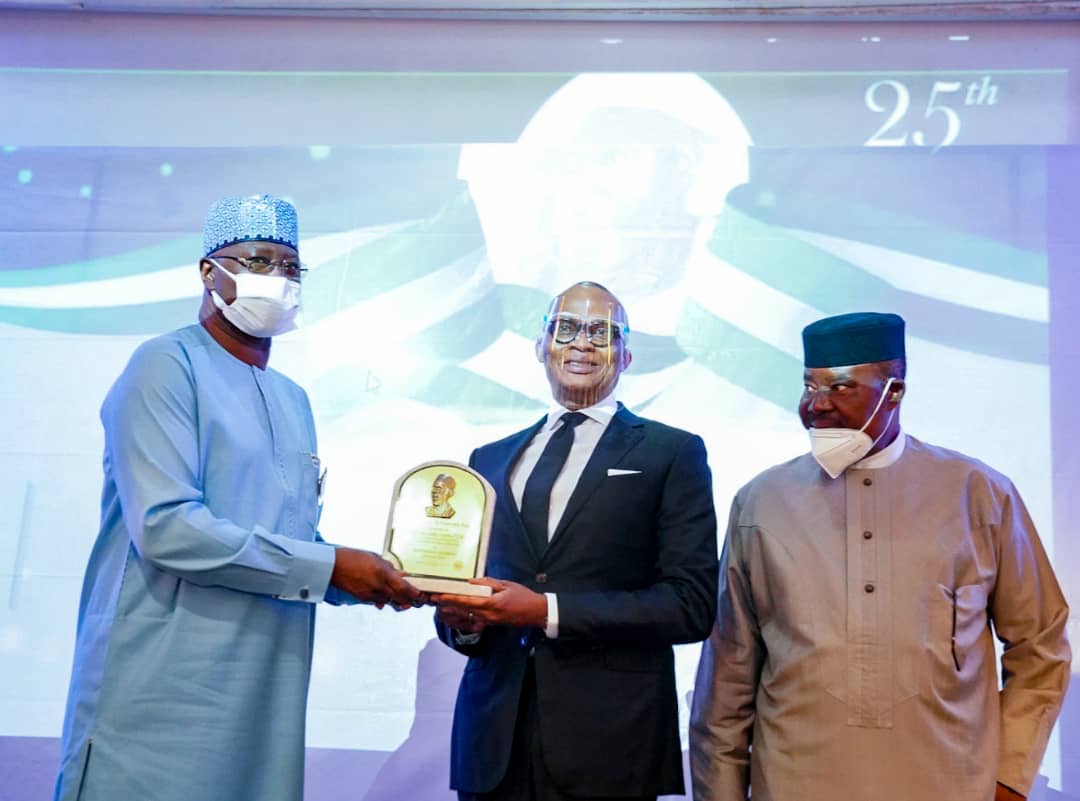 l-r: Secretary to the Government of the Federation, Boss Mustapha; Group Managing Director/CEO, Kennedy Uzoka; Member of Board of Trustees, Public Policy Research and Analysis Centre(PPRAC), organiser of Zik Prize, Marc Wabara, during the conferment of Zik Prize for Professional Leadership on Uzoka in Lagos on Sunday

The Group Managing Director/Chief Executive Officer, United Bank for Africa (UBA) Plc, Kennedy Uzoka, was on Sunday night presented with The Zik Prize for Professional Leadership. The award was presented by the Secretary to the Government of the Federation (SGF), Boss Mustapha, under the chairmanship of Nobel Laureate, Professor Wole Soyinka at a glamorous event held at the Civic Centre in Lagos, and organised by Public Policy Research and Analysis Centre(PPRAC)

Uzoka was announced as the winner of the much-coveted award alongside the Executive Vice Chairman/Chief Executive Officer at the Nigerian Communications Commission, Prof Umar Danbatta. 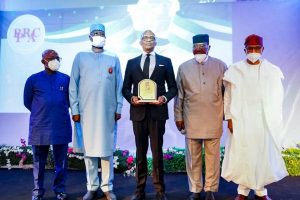 l-r: Former Managing Director, Diamond Bank, Alex Otti,; Secretary to the Government of the Federation, Boss Mustapha; Group Managing Director/CEO, Kennedy Uzoka; Member of Board of Trustees, Public Policy Research and Analysis Centre(PPRAC), organiser of Zik Prize, Marc Wabara,; and Minister of State for Health, Senator Olorunimbe Mamora, during the conferment of Zik Prize for Professional Leadership on Uzoka in Lagos on Sunday

As he applauded the efforts of the organisers, Kennedy Uzoka said, “The Late Nnamdi Azikiwe is someone to whom I accord great respect; he is an iconic African statesman (Zik of Africa as he is fondly called). I am proud to be receiving an award that was first conferred on the late premier 25 years ago. I dedicate this award to the staff of the UBA Group in all our 23 countries of operations. They really are the best”.

Kennedy Uzoka received the award after a thorough, careful and rigorous selection process. His name was announced by Members of the Advisory Board, PPRAC, Professor Pat Utomi, and Executive secretary, Emeka Obasi, who stated that Uzoka was selected as a result of his outstanding contributions to the development and growth of the Banking and Financial Services Industry and also for an unblemished record of service as a banker of international repute.

The Zik Leadership awards is organised by the Public Policy Research and Analysis Centre (PPRAC) and was instituted 25 years ago, in 1995, in honour of the first President of Nigeria, Late Dr. Nnamdi Azikiwe, primarily to encourage and nurture leadership on the African Continent and in the Diaspora.

United Bank for Africa Plc is a leading Pan-African financial institution, offering banking services to more than twenty-one million customers, across 1,000 business offices and customer touch points, in 20 African countries. Operating in the USA, the UK and with presence in France, UBA is connecting people and businesses across Africa through retail, commercial and corporate banking, innovative cross-border payments and remittances, trade finance and ancillary banking services