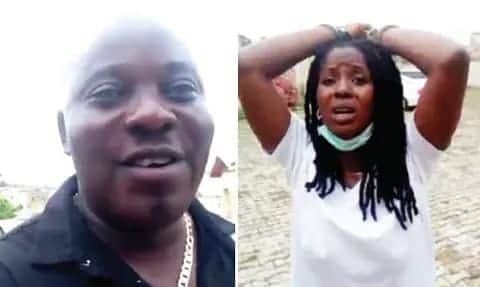 Three police officers and a civilian who participated in the abuse of a lady seen in a viral video on Wednesday, July 22, have been arrested.

The men were arrested after being identified in the viral video.

According to the statement, the men are currently being detained at the Lagos State CID detention facility, Panti, Yaba.

“Two suspects, ASP Tijani Olatunji and Inspector Gboyega Oyeniyi have been arrested for their role in the discreditable conduct and incivility to a member of the public,” the statement read.

“Preliminary investigations show that the policemen who are attached to Area ‘A’ Command, Lion Building, Lagos, were on legitimate investigation activities to Ibadan, Oyo State where the incident took place.

“Effort is being intensified to arrest the two other accomplices. Meanwhile, appropriate disciplinary procedures will be initiated as soon as investigations are concluded,” the statement added.

In the video, one could hear the officer interrogating the young lady named Towobola, following a raid at the apartment of an alleged kidnapper.

According to the officer who spoke in Yoruba language, the young lady was to answer for how she got to know the kidnapper who she claimed to have met only recently.

After whisking the kidnap suspect away, the officers placed Towobola in handcuff and went on to harass her verbally for ‘sleeping with a criminal’.

The interrogation degenerated into very lewd seeming dialogues, with questions ranging from if the suspect is a virgin to how many people she had slept with.

Towobola, who claims to be a graduate of the University of Ibadan, insists that she has not had sex with the suspect and profusely pleads with the policemen not to record her but her pleas attract laughter from the unmoved policemen.

The video went viral after it surfaced online with many calling for the dismissal of the officers, arguing that their conducts were unprofessional.

In the concluding part of the video, Wyclef faces the camera and boasts that he “catches suspects like fowls”.

The video elicited criticisms from a large section of Nigerians on social media.

International Flight: We Are Working Out Protocols For Resumption-Boss Mustapha