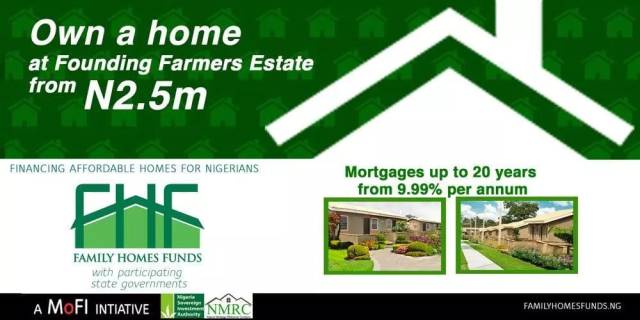 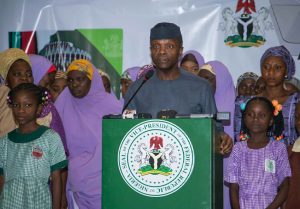 The need to meet the accommodation needs of Nigerians due to an ever-increasing population cannot be over estimated.

Shortage of houses has thus seen most families striving hard to own their own homes in view of an estimated housing deficit of 17 million which increases by N900,000 per annum.

In Nigeria, it is a fact that while some well positioned individuals own several luxury houses both home and abroad, others have had to pay through their noses to achieve the dream of owning just one, albeit an average one. For yet another sect, it remains an elusive dream.

For those whose dreams of owning a house remain elusive, they are a pawn in the hands of very greedy landlords who have turned to thorns in their flesh, intermittently increasing house rents.

There might however be light at the end of the tunnel for this sect of people, as a new housing initiative tagged Social Housing Project (SHP), a product of the Family Home Fund (FHF), has been unveiled by the Nigerian government with the support of the World Bank and the African Development Bank (ADB).

Asides this, the fund will also enable developers deliver ready to occupy family homes with essential services such as water and power from N2.5 million, extending up to N18 million.

To actualize this, the Nigerian government will set aside N100 billion annually as part of its contribution to the one trillion Naira Social Housing Fund.

Speaking during this year’s Democracy Day celebration, Acting President of Nigeria, Yemi Osinbajo gave low income earning Nigerians hope of one day owning a house when he unveiled the SHP aimed at ensuring more citizens  posses their own houses.

According to Osinbajo, anybody earning up to N30, 000 a month would be able to benefit from the housing scheme.

The realisation that those who will benefit from the SHP will only pay low instalments has seen people saying that it is a step in the right direction.

Asides this being a blessing for low income earners, it is also prayer answered for practitioners in the Real Estate sector who have severally called for government support amidst insinuations of neglect.

With the SHP, real estate developers can rejoice, as they will be able to borrow up to eighty percent of the cost of the project from the Family Home Fund (FHF), while they contribute twenty percent from their purse.

While the idea is heart-warming and a breath of fresh air, it has come under serious review, as individuals yearning to own these homes and experts in the sector try to see how realistic it is.

The need to really assess the possibility of a scheme as this living up to expectations is imperative. This is because memories of similar failed projects still surface in the minds of several people who had at one time or the other fallen victim.

The reviews also become very necessary when the cost of land and other building materials including cement, sand and iron are taken into consideration. That other similar schemes, tagged ‘low-cost scheme’, have been deemed outrageous in terms of the per unit cost of the apartment, also does not help issues.

While some people would be quick to conclude that the SHP is unrealistic, it is necessary to state that similar ones launched several years back and indeed yielded results that are still present till date.

At Festac Town located along the Lagos-Badagry Expressway in Lagos State is a Federal Housing Estate constructed in 1977.

Originally designed to house the participants of the Second World Festival of Black Arts and Culture of 1977 (Festac77), the estates which boast of 5,000 contemporary dwelling units was eventually sold to winners who participated in a ballot. Having made an initial deposit of about 25 percent of the real cost, winners of the ballot paid N10 spread out over a period of 25 years.

Asides the Festac scheme, many will not forget in a rush the over 30,000 low-cost housing units built in Amuwo-Odofin, Ijaiye, Dolphin, Oke-Afa, Ilasan-Lekki, Iponri, Ipaja, Abule Nla, Epe, Anikantamo, Surulere, Iba, Ikorodu and Badagry by Lateef Jakande. Till date, the estates remain one of his many legacies.

Other places where such projects have yielded result include Shagari Estate in Ipaja, Alimosho, Lagos State among several places.

While the aforementioned projects might have been successful, other similar ones such as Lagos State Home Ownership Mortgage Scheme popular as Lagos HOMS, a landmark scheme in the administration of erstwhile Lagos State governor and current Minister of Power, Works and Housing, Babatunde Fashola has been abashed with criticisms.

Critics of the Lagos HOMS hold the opinion that it does not impact the poor and average citizens positively due to the rate each unit went for.

Asked if the SHP is likely to benefit the masses, Esther Oromidayo Thontteh, a lecturer in the Department of Estate Management, University of Lagos answers in negation.

According to her, after Jakande’s era, there has not been a housing project targeted at the low-income earners, if the rates the units are sold for are taken into consideration.

Thontteh went on to say that the reason why most of the housing schemes launched have been unaffordable is because Nigeria runs a capitalist economy where housing projects are executed with profit as the ultimate goal.

The Lagos HOMS is however not being criticised for its unfriendly prices alone, but due to the fact that supposed winners of the raffle draws are yet to be handed keys to their houses this is despite the fact that all the draws and certificates presentation ceremonies have been done. This situation has inevitably led to an increase in the number of people asking for refunds.

According to Biyi Adegoke, a Lagos-based property consultant, a government-owned project cannot be given to the public at the same rate as that made by private investors.

Furthermore, Adegoke said that the problem with schemes of this nature is always the cost at which the buildings are made available to the public. “How many salary earners can afford to pay for a mini-flat that goes for N4million? The mortgage rate is too high for a lot of people to afford. ”

In an interview with Independent Newspaper, Gab Ofoma, a member of the International Real Estate Federation revealed his opinion on why most housing schemes fail.

According to him, “our government would want to emulate the West in so many ways, yet we do it wrongly. In the West for instance, people own houses on mortgage. They don’t bother to pay the entire cost at once, once they have a job and they show evidence of consistency, the government makes it possible for people to stagger the payment over several years, with some having to pay with a 20- to 25-year payment plan. That ensures that a greater number of the people are able to access housing. In our case, every government that comes likes to shout about providing two million houses without looking at the issues that make it possible. I have always said this and will keep saying it; government must show evidence of sincerity and commitment.”

Ofoma’s argument might however have been defeated with the direction which the SHP has taking, as it has introduced a mortgage system that will catalyse the development of the mortgage market in Nigeria with the provision of single digit interest rate mortgages as low as 9.99%, a buyer deposit of as low as 10%, with long repayment periods of up to 20 years, for Nigerians at home and abroad.

“I think that it will succeed. It is a good development and the government should be commended. Through this scheme, the government can turn a lot of people to house owners. They can easily access funds from the bank at a cheaper interest rate. It will be a good idea if the government gives out the properties at a cheap rate after construction. They can even give it out as mortgage and allow those interested to pay based on what they can afford. They have to forget the fact that the cost of constructing the building is expensive and see it as fulfilling a cardinal responsibility to their citizens. However, it will be very bad if the government decides to focus on profit because what this will mean is that at the end of the day, those who really need the houses won’t be able to afford them. You know that accommodation is one of the five basic needs of man”, Managing Director Olaleye Properties and Investment Limited, Otunba Tomori Williams stated while reacting to the likelihood that the new housing scheme will succeed.

With the scheme already active in 11 states, only time will tell how successful it will eventually turn out.