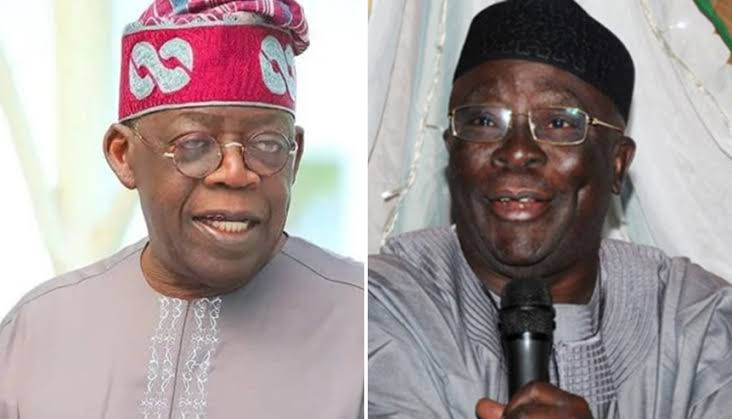 Leader of Afenifere, Ayo Adebanjo, has asked BolaTinubu to declare his source of wealth to the Economic and Financial Crimes Commission (EFCC).

He also refuted speculations that his house in Lekki was built for him by the national leader of the All Progressives Congress (APC), Tinubu.

Chief Bisi Akande, a former governor of Osun State had in his recently released autobiography titled ‘My Participations’, claimed that Adebanjo coerced Tinubu to build a house for him in Lekki. 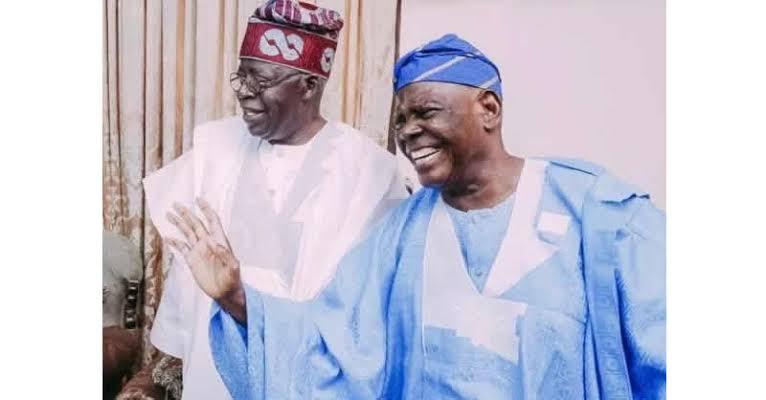 “One day, Sir Olaniwun (Ajayi) was launching a book at Muson Centre, Lagos. After the book presentation, Tinubu said I should not go and that he would like to see me. We met in a small room where he also invited Sir Olaniwun Ajayi. ‘Papa, you can see that this document is old, Tinubu said as he handed over a big envelope to Ajayi. This is your C of O (Certificate of Occupancy)!’

“Tinubu told me later that after he presented Adebanjo’s C of O to him, Adebanjo was always pestering Tinubu until he helped built a house on the plot. The street was also named in honour of Adebanjo and he is living in that house now at Lekki Phase One,” Akande had alleged.

Reacting to the claim, Adebanjo said that he expected Tinubu to have refuted the “malicious falsehood about me emanating from his “Man Friday” since he was at the book launch.

The Afenifere leader said he built the Lekki house with his resources and a bank loan.

In a press statement, Adebanjo released on Thursday, December 16, he said:

“I hold this view because Bola Tinubu just some 3 years ago on the occasion of the presentation of my auto-biography ‘SAYING IT AS IT IS’ that for my incorruptibility and strength of character he Bola Tinubu would not have been Governor of Lagos State in 1999. What then could he be demanding from me after his two-term governorship to make me pressurize him to build a house for me when I did not get a naira from him before he became the governor?”

“A lot has been said in the press and the social media to demolish tantrums. But I owe a duty to myself and to put the record straight for posterity about the big lie that Bola Tinubu built my house in Lekki for me.

“I, therefore, deny categorically that my house at Lekki was built with my resources through the sale of 3 developed properties, loan from GTBank, and the sale of undeveloped landed property given me by my late leader Chief Obafemi Awolowo of blessed memory.

The details are as follows: “1. A 4 bedroom duplex with 2 bedroom flat enclosed with 2 undeveloped plots at plot 4, block 14, Nuru Oniwo Street, Aguda Surulere, Lagos State, this is where I was living before moving to Lekki. The house was commissioned in 1972 by Chief Obafemi Awolowo.

“A wing of the duplex was once occupied by a staff of the security outfit then known as “special branch” headed then by the late Alhaji M.D. Yussuf who later became Inspector General of Police when General Olusegun Obasanjo was the Head of State. It was later occupied by one of the wives Chief Pius Akinyelure, who often visit his wife there in company of Senator Bola Tinubu.

“The gate of this property was forced open by Abacha security forces when NADECO was holding a sendoff party for American ambassador Walter Carrington in my house, I took the Federal Government to court for damages and I was awarded #1million naira which has not been paid till today by the Federal Government, Mr. Olisa Agbakoba SAN, was my counsel. The house was sold to St Baths Aglican Church, Aguda, Surulere.

“2. Two storey building at Odedola Street, Surulere, Lagos State. I bought it through an Estate Agent by name Mr. Shiwoniku who has relocated to UK, he has a brother who is a legal practitioner in Abuja.
The house was sold to a Ghanaian by name Mr Akappo. He is still alive and he lives in one of the flat in the building.

“3. Four storey building with a warehouse on the ground floor and six flats on top. It was commissioned by Chief Awolowo in 1977.
I inherited the plot of 45’X100’ from my mother Salamotu Anomo-Adebanjo, who built a bungalow on it.

“She bought the land when I was in primary school in 1940 from one Pa. Idowu Onitiri for £20, which she paid by installment of £10, £7, £3. His son Akanbi Onitiri, executed the conveyance for me without extra payment after showing him the purchase receipts from his father, when I was developing it in 1976. Akanbi Onitiri is the father of Sumbo Onitiri, a well known estate surveyor in Lagos. The building was sold to a woman through an estate agent.

“I then took a loan from GTBank to complete the house in Lekki where I am living now. When the interest on the loan became unbearable, I was compelled to sell the undeveloped land given to me by Chief Awolowo in Dide-Olu Estate in Maroko Victoria Island. One Mr. Ade Otusanya a friend of my son Femi Ayo-Adebanjo bought the land.

“The Lekki property, the house in my village, Isanya Ogbo, and 3 Bedroom flat in a town house, at Omorinre Street in Lekki are the properties I have in the whole world.

“I hereby authorize the EFCC to verify the above facts.

Adebanjo then went on to allege that Tinubu financed Akande’s building at Ila-Orogun and some other properties in Lagos and abroad while calling on Tinubu to explain how he allegedly bankrolled elections in Lagos state and Nigeria.

“It is alleged that Chief Bisi Akande’s building at Ila-Orogun, which I understand is more than double in expanse of my house in Lekki and some other properties he has in Lagos and abroad were financed by Bola Tinubu. His house in Ibadan was also alleged to have been built by the contractor that built the secretariat in Osogbo, when he was the Governor of Osun State.

“I hereby challenge Chief Bisi Akande to clear the air by disclosing the source of financing these properties as I have done above.

“Asiwaju Bola Tinubu, the great philanthropist should also disclose the source of his wealth with which he bankrolled the elections of APC in the Southwest and that of General Muhammad Buhari and his various properties in Lagos. He should also authorize the EFCC to verify such details as I have done above.” he said

Related Topics:AfenifereAyo AdebanjoBola TinubuEFCCTells EFCC Your Source Of Wealth; Ayo Adebanjo To Bola Tinubu
Up Next

Why We Gave Yusuf Buhari A Title-Emir Of Daura