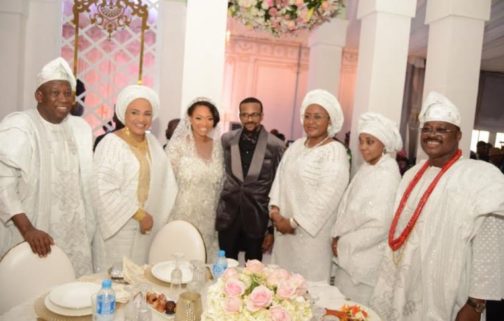 It will take a lot of thinking to ascertain if there has ever been a wedding as criticised as that between Fatima Ganduje and Idris Ajimobi.

Not even that between Abi Kuku and Funke Fowler which held in several continents or that of Abba Atiku to his American beau Mariana attracted the amount of criticisms Ganduje and Ajimobi’s wedding is presently attracting.

Shockingly, even Folarin Alakija’s wedding to Nazanin Jafarian Ghaissarifar which was estimated to have cost his mom Folorunsho Alakija N2 Billion did not get such amount of thumbs down.

Since the first phase of the carnival-like celebration which held in Kano state, it has been one attack after the other.

One of the most notable criticisms came from Muslim cleric Ahmed Gumi, who described the wedding as a disgrace to Islam.

The second phase which recently held in Ibadan, Oyo state, has not gotten a better review, as it has come under serious scrutiny owing to the extreme show of wealth and the number top personalities including several governors who graced the event.