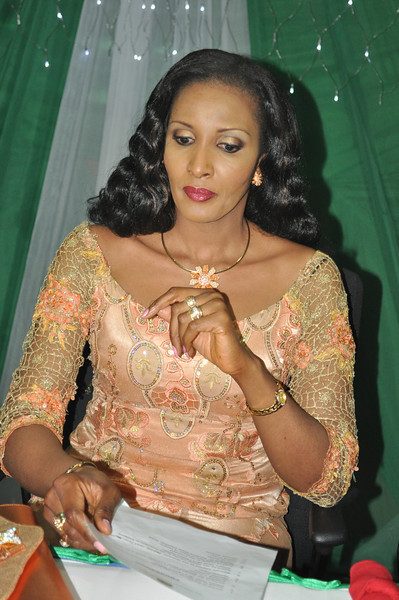 Drama ensued on Thursday at the inauguration of Prof Chukwuma Soludo as the governor of Anambra when the wife of outgoing Gov. Willie Obiano, Ebelechukwu and Mrs Bianca Ojukwu were involved in a fracas at the event.

There are, however, contradictory reports as to who slapped who first.

But The News Agency of Nigeria (NAN) correspondent who was at the scene of the event reports that the incident occurred immediately after Soludo took his oath of office.

NAN reports that dignitaries including Ex-Gov Obiano were already seated when Mrs Obiano stepped in and moved to the front row where the widow of Dim Odumegwu Ojukwu was seated and slapped her.

The action drew the attention of security agents and some personalities who pulled Mrs Obiano off the hold of Bianca who was visibly shocked at the action.

Mrs Obiano was later taken away and shortly afterwards, her husband left the venue since the incident happened after the new governor had been sworn in.

However, VANGUARD reporter on the ground, reported that There was a show of shame at the government house, Awka during the inauguration of Professor Charles Soludo as governor of Anambra State when the wife of the form taken the governor, Mrs Ebelechukwu Obiano and wife of Chukwuemeka Odumegwu Ojukwu fought publicly.

Soludo had already taken the oath of office and was signing the papers when Obiano’s wife arrived.

She went straight to where Bianca Ojukwu was sitting and told her, ” you said we will never win the governorship and here you are. You are a witch.

Instantly, Bianca slapped her and fight ensured at the high table

Security men rushed to separate them and dragged Mrs Obiano to where her husband was seated calmly.
As soon as Soludo finished signing the documents, Obiano and his wife left.
Bianca Ojukwu stayed till the end of the ceremony.

Recall that VANGUARD had reported that APGA reconciled with Bianca Ojukwu, when a delegation which included the Speaker, Anambra State House of Assembly, Mr Victor Okafor was led by a former chairman of the party, Chief Victor Umeh, visited the wife of the former Biafran warlord.

In her remarks, Bianca Ojukwu had said that it was sad that the party found itself in such a dilemma that could have been averted.

The former Nigerian Ambassador to Spain regretted that previous effort made to assuage aggrieved members of the party hit the rock.

“There have been to date at least two other committees that have been set up by the governor to advance the grievances of a very great number of APGA members who are dissatisfied with the party.

“The first and second reconciliation committees made recommendations but they never saw the light of day,” she said.

She, however, pledged to put behind the incidences of the past and contribute to the progress of the party.

“I am very much looking forward to putting behind the dark history of the party and the bad experiences that so many of its members have had and still experiencing.

“We are all looking forward to moving towards a future uncontaminated with the bad memories of the past.

“We believe that on November 6, we should have a new governor in Anambra under APGA and we will put behind this very sad chapter of our party’s history,” Ojukwu said.

2023: PDP May Die If We Don’t Win Next Presidential Election-Atiku Abubakar

Face Off: Obaseki Speaks On Harmonious Resolution With Wike