Ned Nwoko, the businessman husband of thespian, Regina Daniels has been speaking about her private life.

Nwoko, recently disclosed that he married the thespian a virgin. 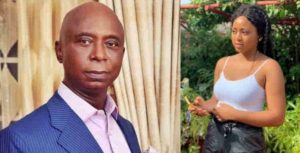 Shockingly, he also revealed that his other five wives were also virgins when he married them.

Recalling how he fell in love with fair-skinned thespian on the first day he met her, Ned stated that it was impossible for him to marry anyone who is not a virgin because it is important to him.

Why not Regina? When I met her, I didn’t even know who she was because I don’t watch movies, whether British, Nigerian or American. Also, I am not a social media person. Up until that time, I didn’t have Facebook or Instagram accounts. So, I didn’t know about Regina until she came to my house with her family on a tour. My house in the village (Aniocha North Local Government Area, Delta State) is a tourist attraction of sorts.

On her part, Regina explained what it felt like being married to the 59-year-old man, saying;

I feel free. I can do whatever I want, dress how I like, live my life the way I want to. My husband is always pushing me to be a better person. He wants me to be more exposed and see the world in a different way. As a matter of fact, there are many things I enjoy about the marriage that I cannot explain.