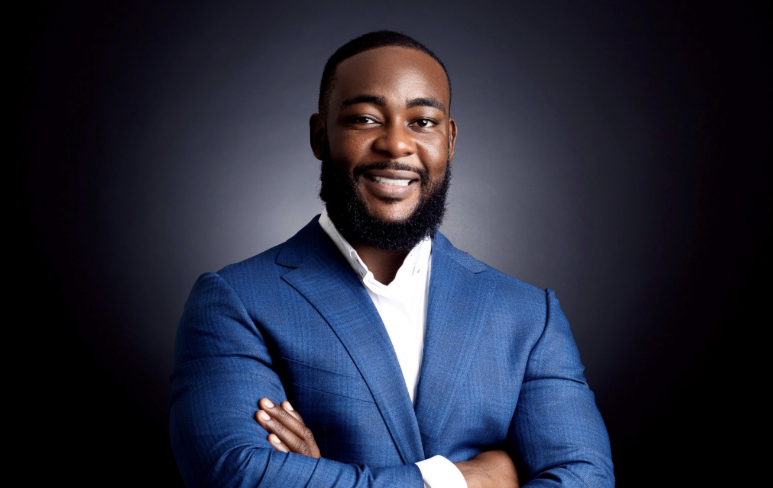 Nigerians have lambasted Captain Jamil Abubakar, the son-in-law of Africa’s richest man, Aliko Dangote for his insensitivity towards the killing of Deborah Samuel.

Recall that Samuel a student of the Shehu Shagari College of Education, Sokoto State was killed for allegedly blaspheming Prophet Mohammed.

Samuel was killed in a very gruesome manner after she was wiped, stoned and set ablaze, amidst a nationwide outcry including President Muhammadu Buhari and Vice President Yemi Osinbajo condemning the killing of the student.

In his reaction to the killing of the undergraduate,  Abubakar who is the son of the former Inspector-General of Police, Mohammed Abubakar, and husband of Fatima Dangote, one of the daughters of Aliko Dangote justified the killing of the student.

In a distasteful post on social media, Twitter on Friday, May 13,  Abubakar said that the punishment for blasphemy is death, obviously referring to the killing of Deborah Samuel by some of her Muslim classmates

He wrote: “In Islam we respect the Injil, Taura, Zabur, we were never taught to disrespect any of the book, or any of the prophets From Adam to Muhammad SAW & the Quran.

“The punishment for Blasphemy is DEATH! in most religions including Christianity.
Respect Peoples religion it’s simple!”

Further, he wrote: “In Islam the Sharia court handles these cases. Islam put rules & regulations to control peoples action and motives, so the wrong ones are not cheated and justice is served the right way.” 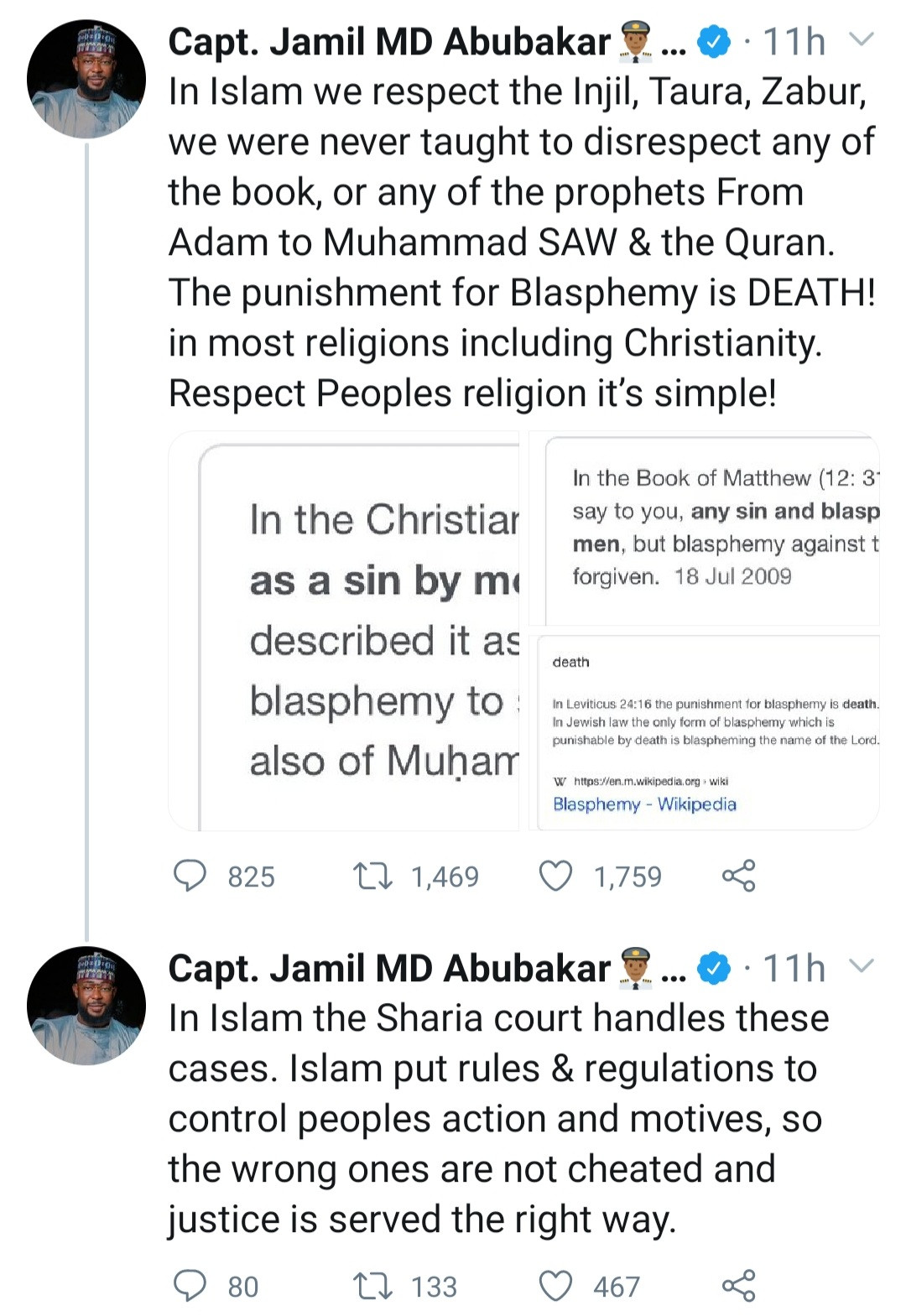 Interestingly, Abubakar’s post has been attracting reactions among Nigerians including Media personality, Osi who questioned his tweet asking: “I’m sincerely shocked. You actually believe its ok to take another’s life over blasphemy?”

Meanwhile, while reacting to Osi, Abubakar wrote: “What my personal opinion is, has nothing to do with the rules in place Osi. I didn’t make them, I’m not the sharia court. I live by Islamic faith. I don’t promote Violence.

“The Law is the Law. So this is not about what I think! The laws have been there. Check more on Blasphemy.” 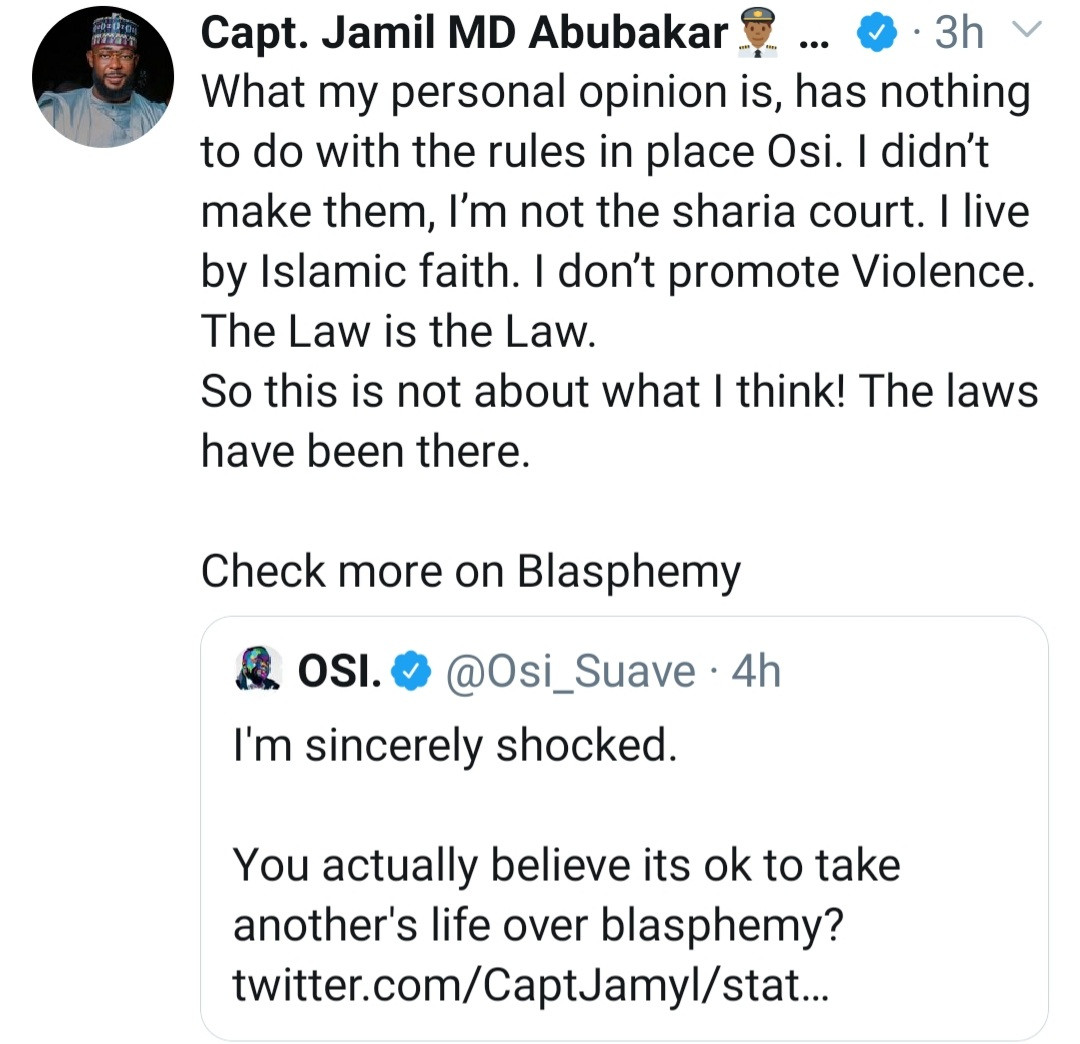