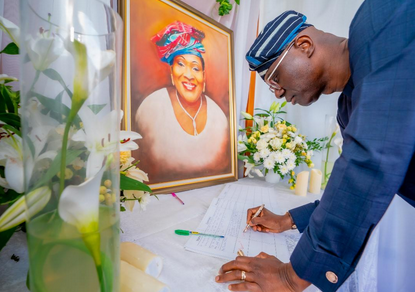 Lagos State Governor, Mr. Babajide Sanwo-Olu on Wednesday paid a condolence visit to the family of the late Kemi Nelson, a former South-West zonal Women Leader of the All Progressives Congress (APC) and ex-member of the Governance Advisory Council (GAC), the apex leadership of APC in Lagos State.

Governor Sanwo-Olu was accompanied by members of the State Executive Council, which included the Secretary to Lagos State Government (SSG), Mrs. Folashade Jaji; Commissioner for Finance, Dr. Rabiu Olowo; his Budget and Economic Planning, Mr. Sam Egube; Commissioner for Establishments, Training and Pensions, Mrs. Ajibola Ponnle, Commissioner for Energy and Mineral Resources, Mr. Olalere Odusote and his Science and Technology counterpart, Mr. Hakeem Fahm, among others, offered prayers for the deceased and the family members she left behind.

The Governor and his entourage were received by the deceased husband, Adeyemi Nelson and some of his children.

Sanwo-Olu in an earlier statement issued by his Chief Press Secretary, Mr. Gboyega Akosile, on Sunday shortly after the demise of the ex-APC Women Leader described the death of Kemi Nelson as a great loss to Lagos State, especially the ruling party, considering her unique position as one of the great mobilisers in the party.

He said: “The death of Chief (Mrs) Kemi Nelson is a painful and big loss to me personally. It is also a great loss to the Governance Advisory Council (GAC), our party, APC, the deceased family and friends.

“Chief Kemi Nelson as a consummate politician and committed leader of her people, especially women, contributed immensely to the growth and development of our great party as APC Women Leader in Lagos and South-West. She also did her best for our dear Lagos State during her tenure as Commissioner for Women Affairs and Poverty Alleviation.